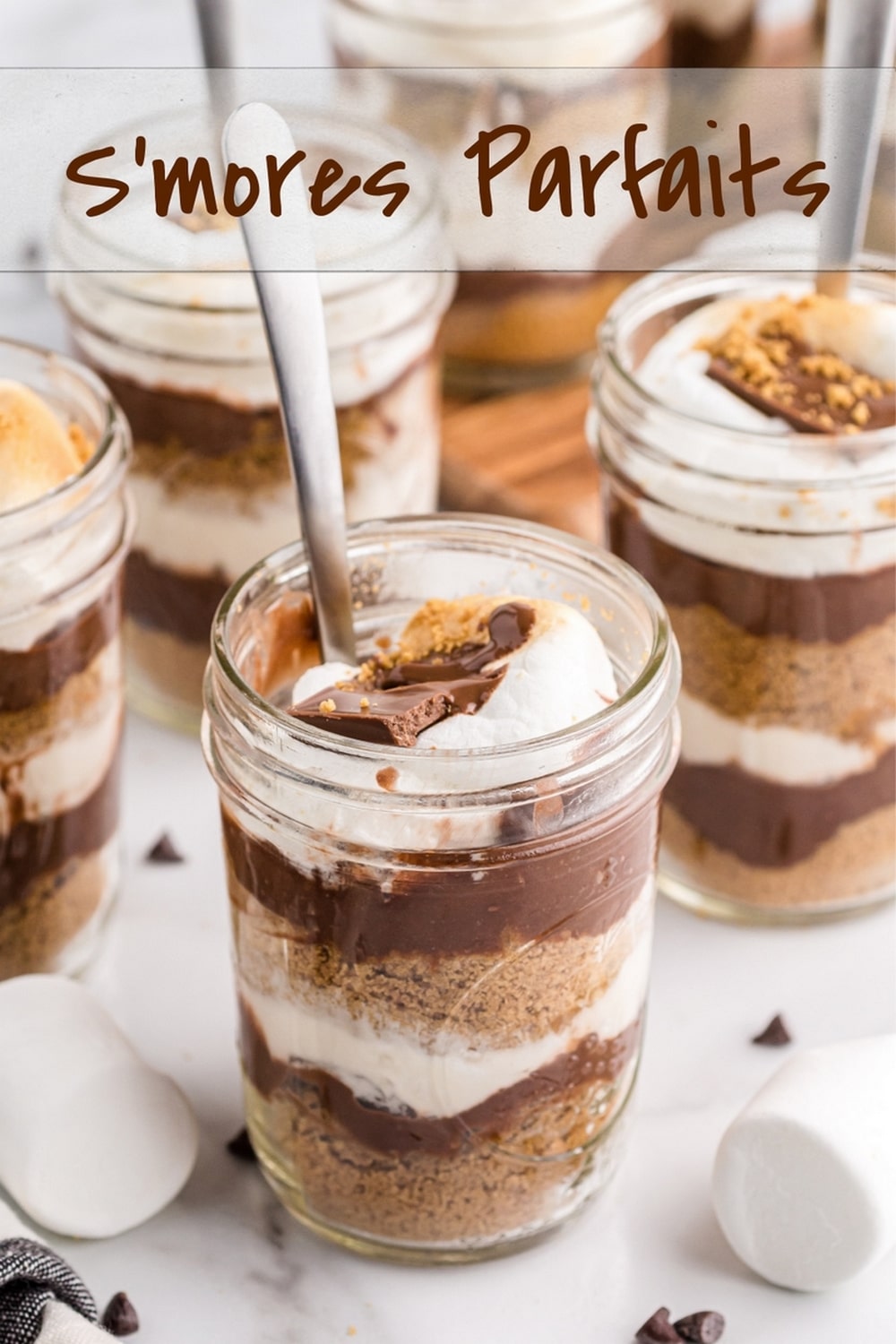 No need to build a campfire to make these layered s’mores parfaits come to life! A close relative to s’mores pudding, but with layers of crunch and a better presentation. 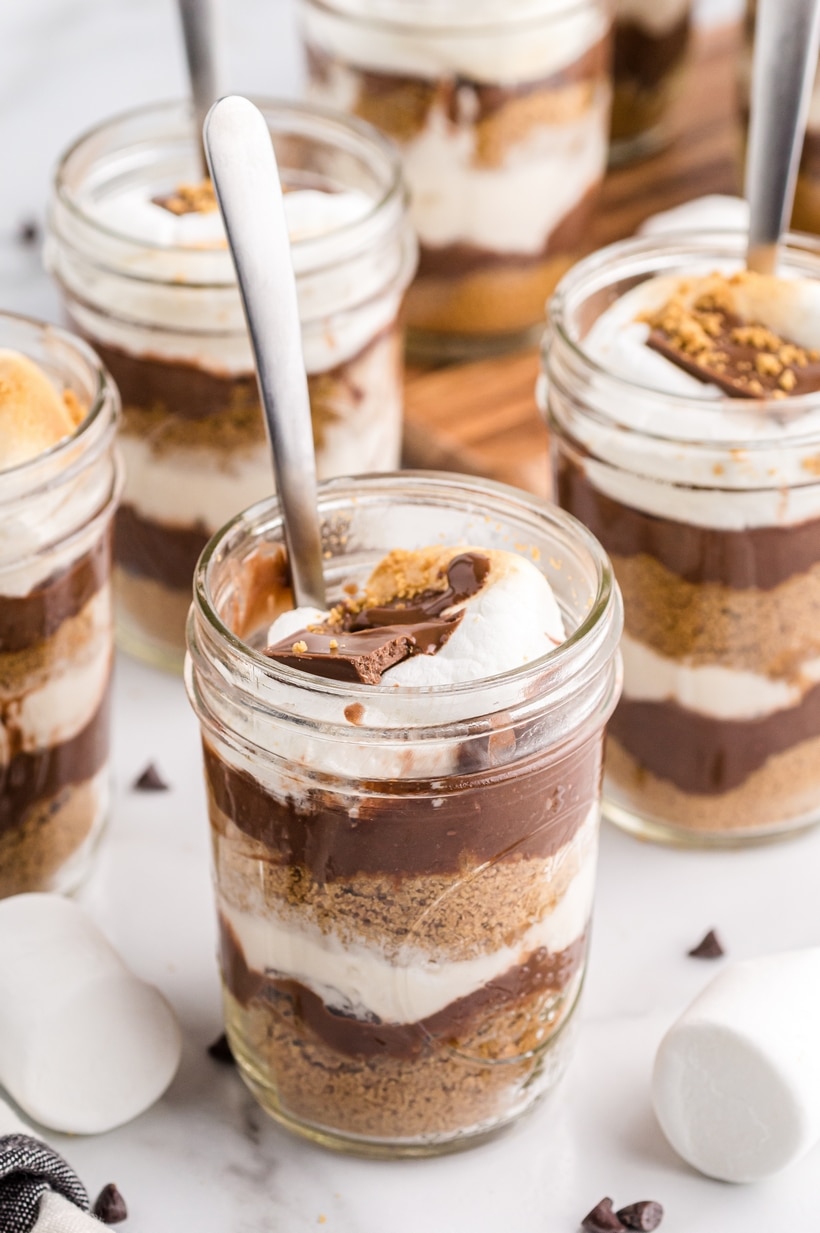 What Is A Parfait?

Or better yet, what makes a parfait a parfait? The answer really depends on what country you’re from. The parfait did originate in France and translates to “perfect”. And “perfect” definitely describes this s’mores version perfectly.

The parfait in France refers to a dessert made by boiling together cream, egg, sugar and syrup to create a very custard-like puree.

The version of parfait we’re used to here in America has varying layers of ingredients, things like granola, yogurt, nuts, fruit and even whipped cream is the most common and are often served for breakfast.

Parfaits were classically served in stemware at fine dining restaurants, but nowadays we see parfaits as you do here, in short and stubby glass jars and other varying see-through vessels.

This s’mores parfait not only tastes delicious, it’s going to transport you directly to your favorite campfire site, without having to leave the comfort of your home. 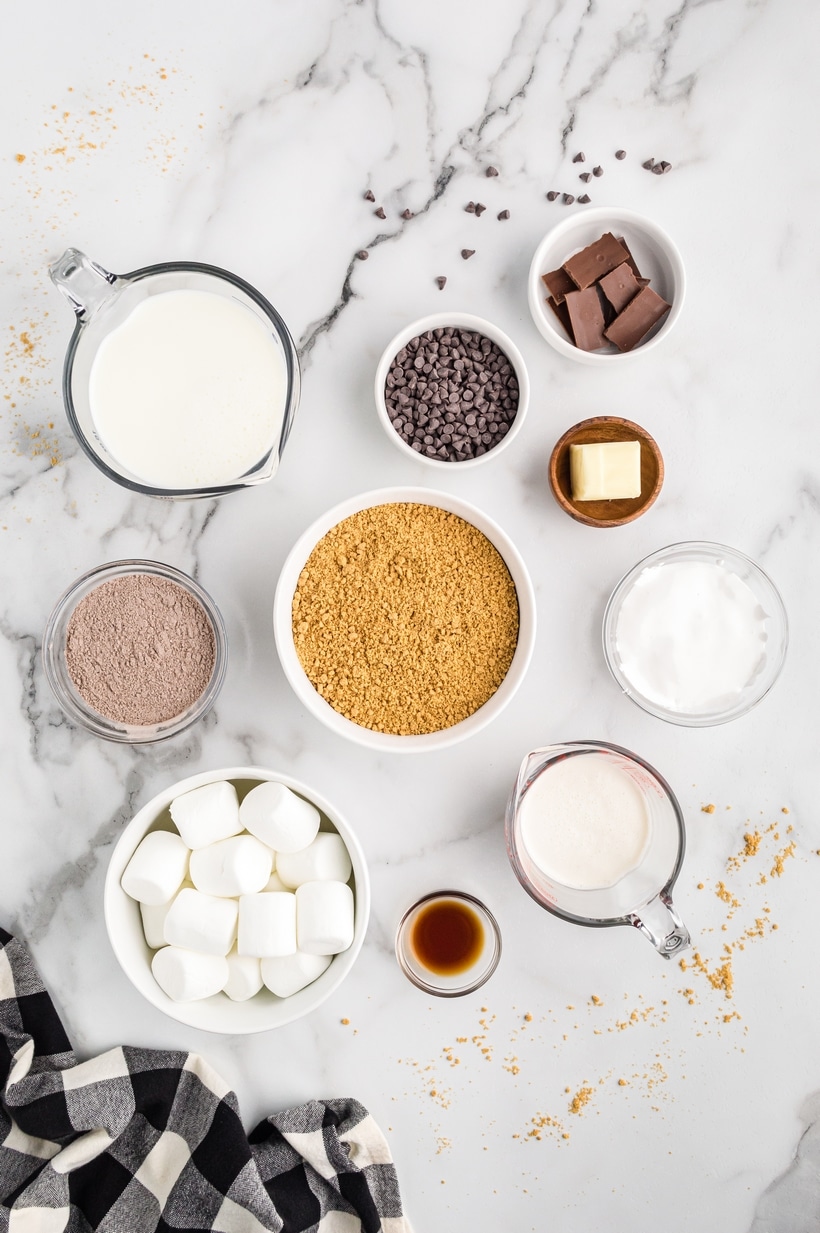 This s’mores parfait recipe is simply the best when it comes to recreating a traditional s’more at home in your kitchen. No need to even step outside if that’s not your thing.

Using traditional and non-traditional s’mores ingredients in a new way, you can easily make a large batch of eight s’mores parfaits at home, from scratch, in a very short amount of time.

Unlike other parfait recipes that sit overnight in the fridge, this one is best served right away.

While this is definitely a kid-friendly dessert, I find adults love it even more (no sticky fingers or smelling like a campfire). Not to mention, you can easily drizzle your favorite chocolate liqueur over the top if you like. 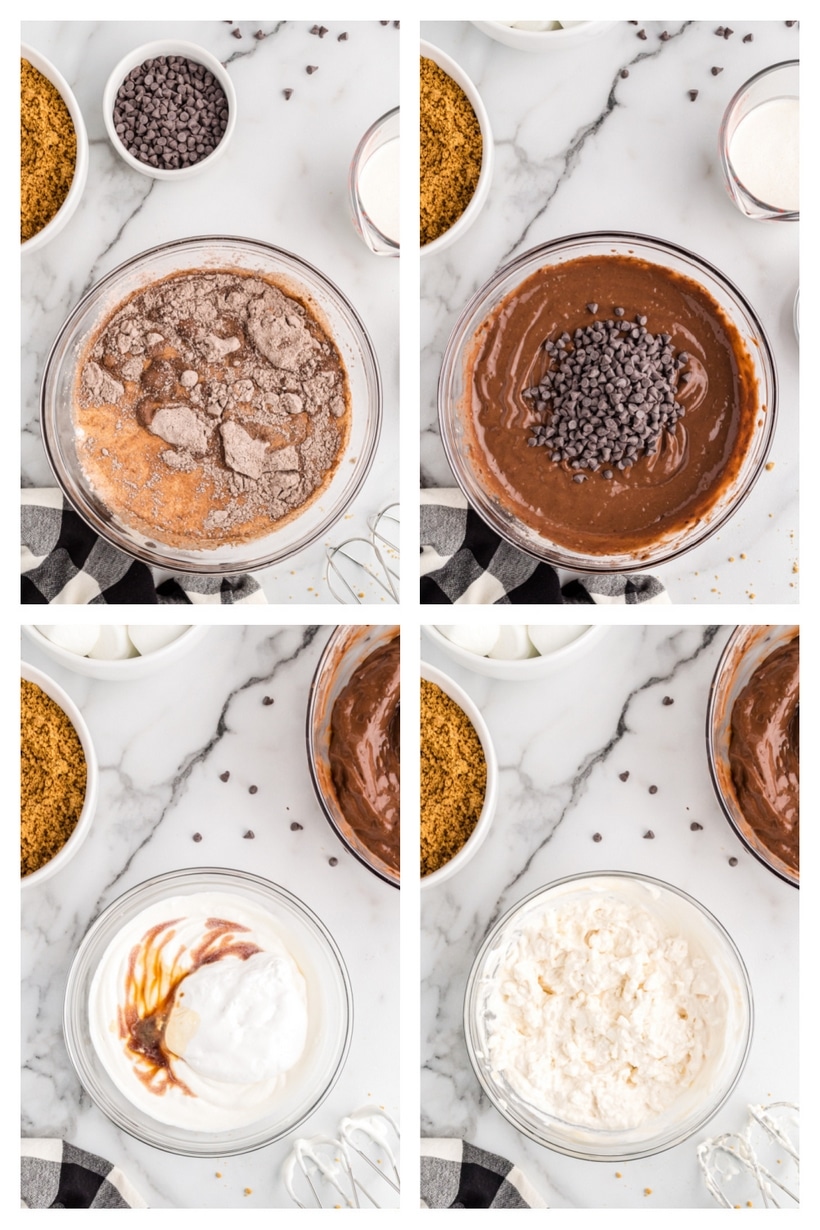 What Ingredients You Need

Here are all of the ingredients in my delicious S’mores Parfait recipe: 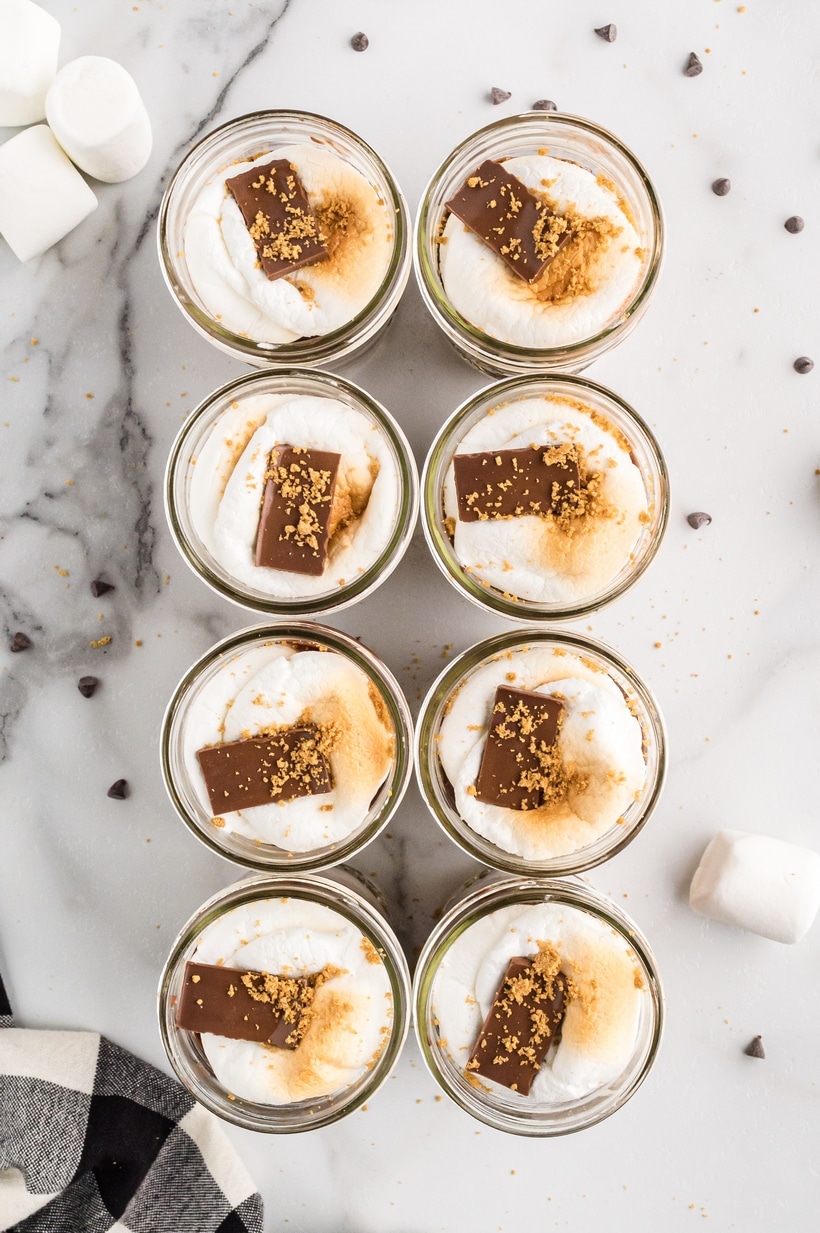 How to Make a S’mores Parfait

There are only a few steps to get to s’mores bliss, you’ve got this! And because we’re using instant pudding in this recipe, we don’t even have to wait for pudding to cool. As long as you have all the ingredients, this can absolutely be a dessert you can make last minute or it can be a last minute-decision to make it. You decide.

Here’s how to make S’mores Parfaits:

1. Use a small bowl to mix the graham cracker crumbs with the melted butter until it is well-combined. Set the mixture aside until we start layering.

2. Empty the pudding mix into a medium mixing bowl. You’re going to slowly pour in the cold milk, while using a hand-held mixer to combine the pudding and the milk. As it comes together it will thicken. It will take about three minutes. Fold in the mini chocolate chips with a spatula and set aside.

3. Using a separate bowl (best if it’s chilled) add the heavy whipping cream and whip with a hand-held or stand mixer until soft peaks form. Dollop in the marshmallow creme and vanilla extract and mix just until combined.

5. Finish with two large toasted marshmallows, a piece of chocolate bar and a sprinkling of graham cracker crumbs.

Get the Complete (Printable) S’mores Parfaits Recipe Below. You’re going to love it! 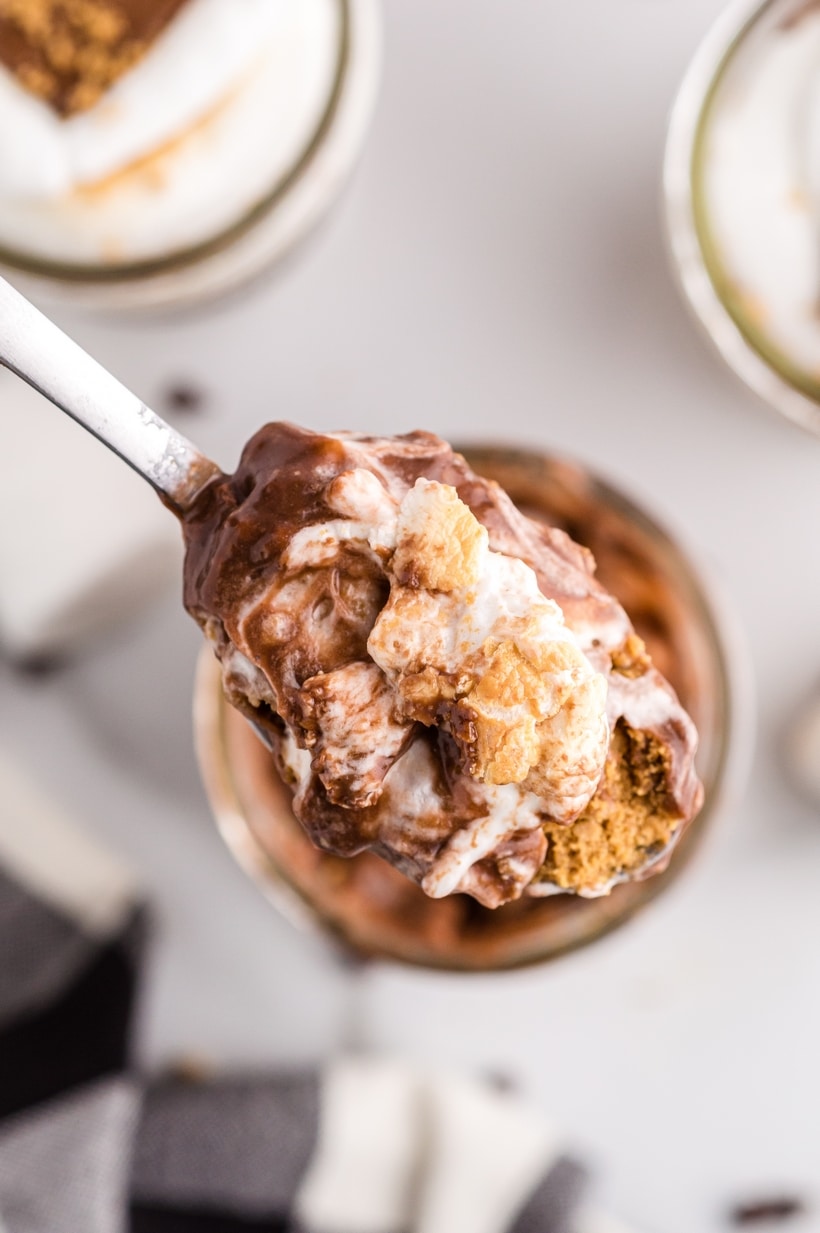 How Should I Toast the Marshmallows?

Toasting the marshmallows for the top really adds to the flavor of these S’mores Parfaits and you can toast your marshmallows in a variety of ways. You can toast them on a traditional campfire, over a hot grill, over a gas range, or lay them on a baking sheet and broil until toasted. You can also use a kitchen torch (the way I do it) to toast them.

How Long Does This Dessert Last?

If you have any leftover parfaits store them tightly covered in the refrigerator for up to five days. The toasted marshmallow will harden up a bit, but it still tastes delicious!

Can These S’mores Parfaits Be Made in Advance?

If you would like to make these parfaits ahead of time, follow the recipe through step four. You will wait to add the garnish until right before serving. These parfaits can be made up to two days in advance.

What Substitutions Can I Make?

Substitute mini M&M’s or vanilla chips in place of the mini chocolate chips.

Use another flavor of pudding or use crushed cookies instead of graham crackers.

Add sprinkles or shredded coconut to the top!

The sky is the limit with this easy, versatile, no-bake dessert! 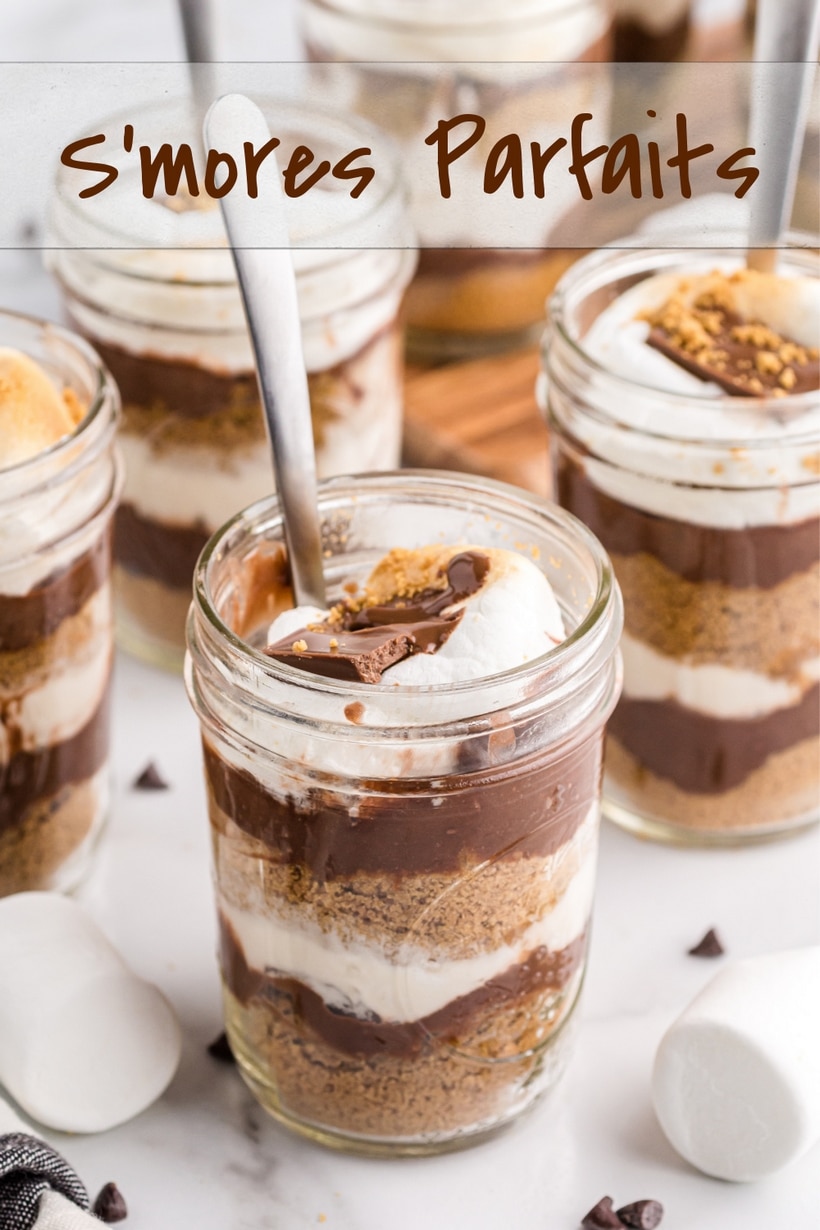 FYI: Please join our NOBLE PIG FACEBOOK GROUP for a more in depth look at recipes, cooking tips and other member contributions. 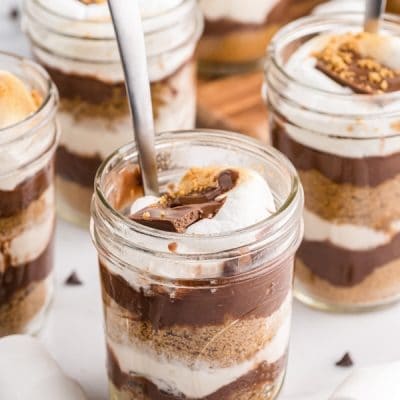 Make sure to recipe posts for frequently asked questions, substitutions and other information to make this recipe a success.