Put down your margarita and give these Key Lime Caipirinhas a chance. After much tweaking, Brazil’s national cocktail never tasted so good. 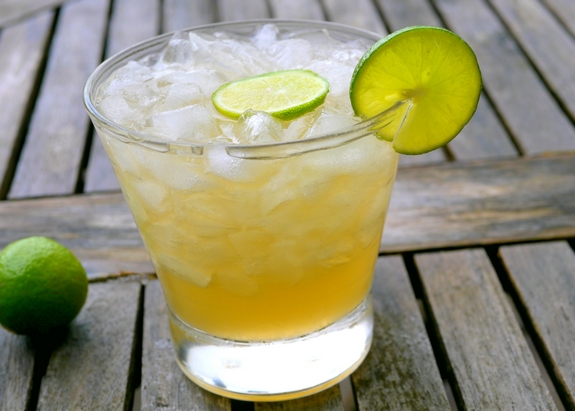 There’s nothing worse than a drink on a menu you have no idea how to pronounce. These Key Lime Caipirinhas might not be easy to say ((kai-purr-REEN-yah), but they are not a problem to drink. Think of them as a daiquiri’s, Brazilian cousin and one of the most refreshing and easy rum-like cocktails you will enjoy this summer.

This cocktail is a current favorite drink. And since it’s made with key limes, it’s definitely not a cocktail you would make for a large party; squeezing that many key limes would be…well, annoying. However, it’s an awesome drink to make for yourself and partner on a Friday night or any day of the week. I am normally a mojito or margarita girl, but this drink is pretty awesome. 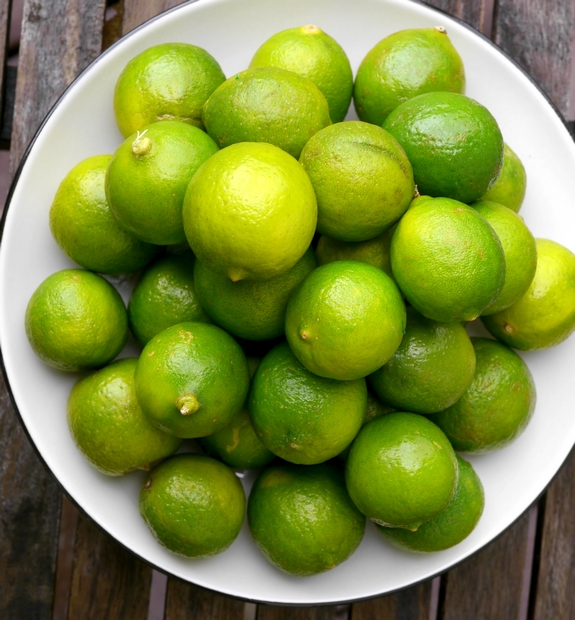 I’ll be honest, until about a year ago, I had never even heard of a Caipirinha. However, I ordered one at a restaurant after seeing it on the menu. I  loved it. It wasn’t too soon after I started noticing Caipirinhas on more and more drink menus around town. I ordered one every single time. I was literally in love with its taste. 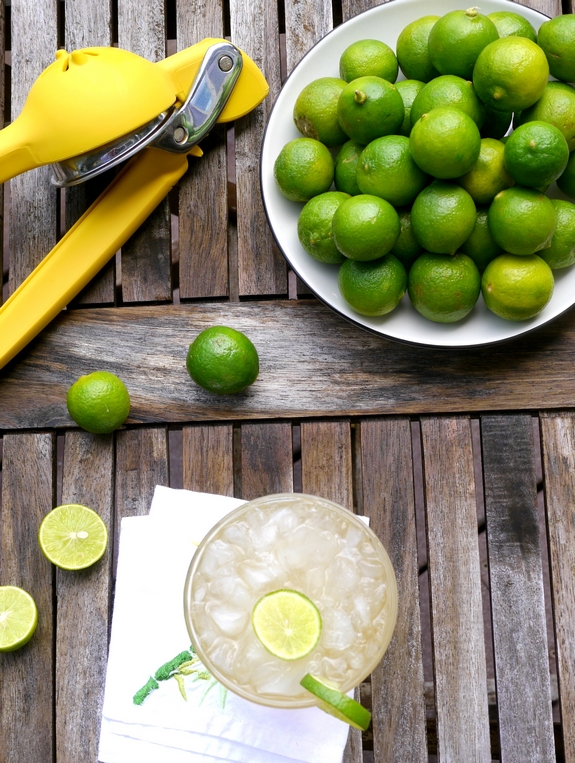 I figured it was about time to learn a few things about my new favorite cocktail and how to concoct one at home. The Caipirinha boasted a whole different flavor profile than anything I was used to drinking.

PRO TIP: to make squeezing key limes easier and to make sure you extract all the juice, use this squeezer. It is absolutely a must in my kitchen for all lemon and lime squeezing. I could never be without it. 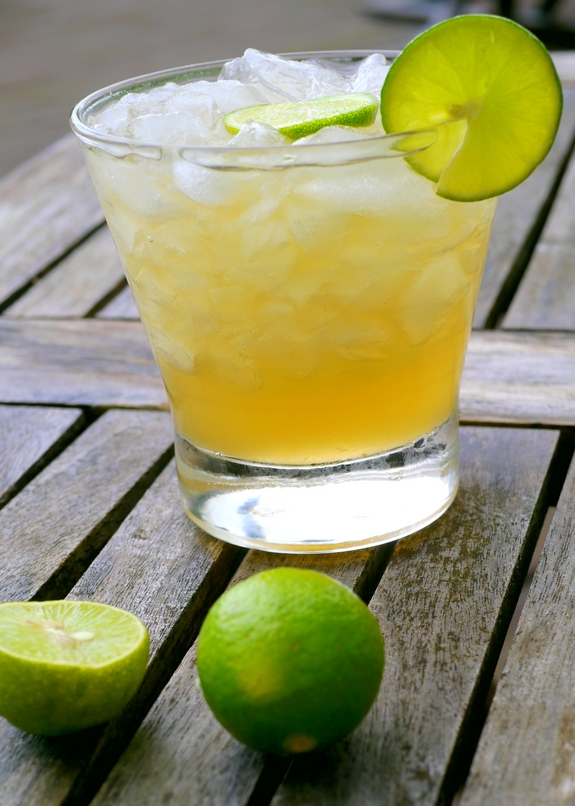 First thing I found in my research was the Caipirinha features a spirit known as cachaça (ka-SHA-sa), a Brazilian style of rum made from pure sugarcane juice rather than molasses. Cachaça has a completely different taste than “regular” rum; a much fruitier and livelier nose compared to rums derived from molasses and a much cleaner taste in comparison to a the spicier, caramelized flavors of “regular” rum. 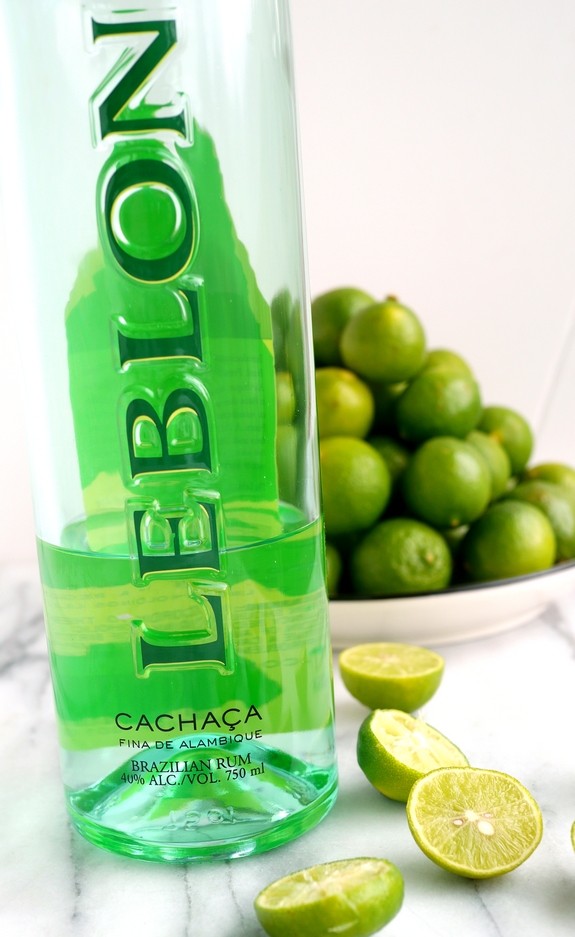 After lots of research I found cachaça can also have different flavors based on the type of wood it is aged in or how it is distilled.

My favorite brand of cachaça is the one you see above. This cachaça is made via a traditional batch method in copper pot stills, instead of cheaper distillation columns, making it an artisanal spirit in its own right. This cachaça rests in French oak casks previously used in France to age XO Cognac for up to six months. This method is what gives this particular brand its smooth finish. 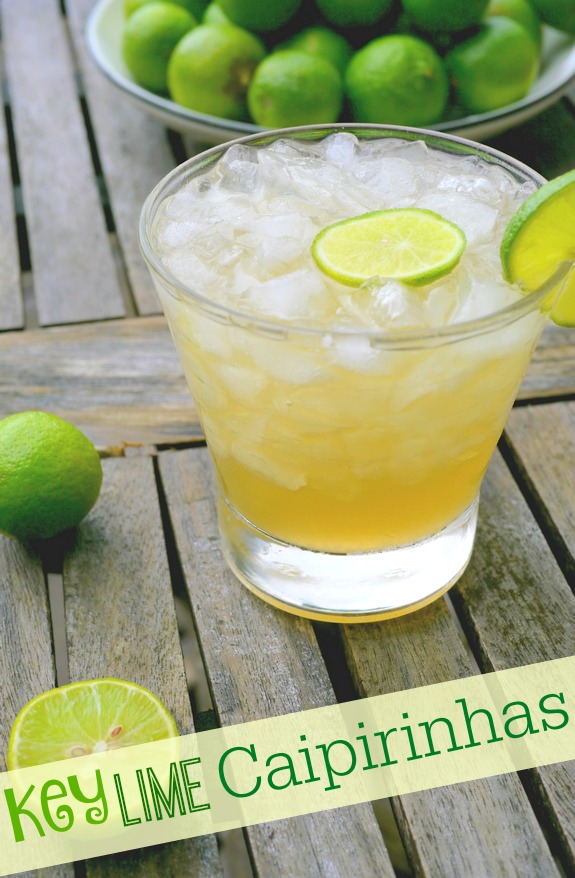 So after learning about this much celebrated drink and figuring out what brand of cachaça I wanted to invest in, I was ready with my ingredients; cachaça, lime and sugar. I read a million recipes and all included muddling the limes, dissolving the sugar and finishing with the cachaça and ice. Easy. 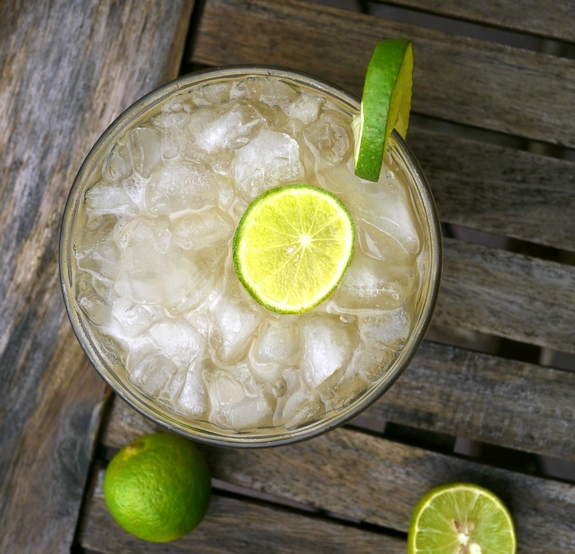 I made my first batch of cocktails and I took one sip and gagged. They were so awful. So strong. So bitter. Not sweet enough. Not enough lime. I was so disappointed. They tasted nothing like what we were being served in restaurants. I literally spent the next month trying to vary the recipe to even come close to what I was used to drinking. Couldn’t do it. 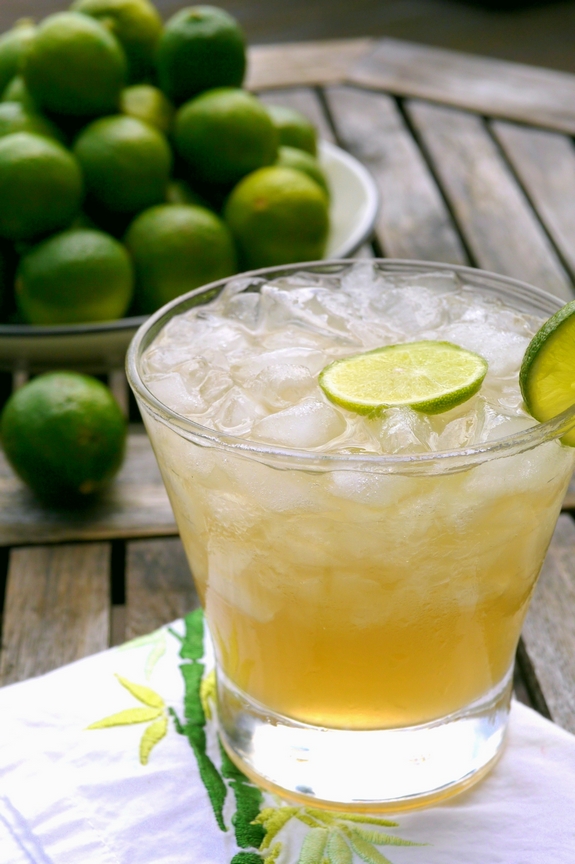 I tried using Sprite as a sweetener (which I despise). I tried making a simple syrup. I tried varying amounts of every ingredient and they were just never quite right. I almost gave up. It was odd that such a simple drink, with simple ingredients was so out of reach. 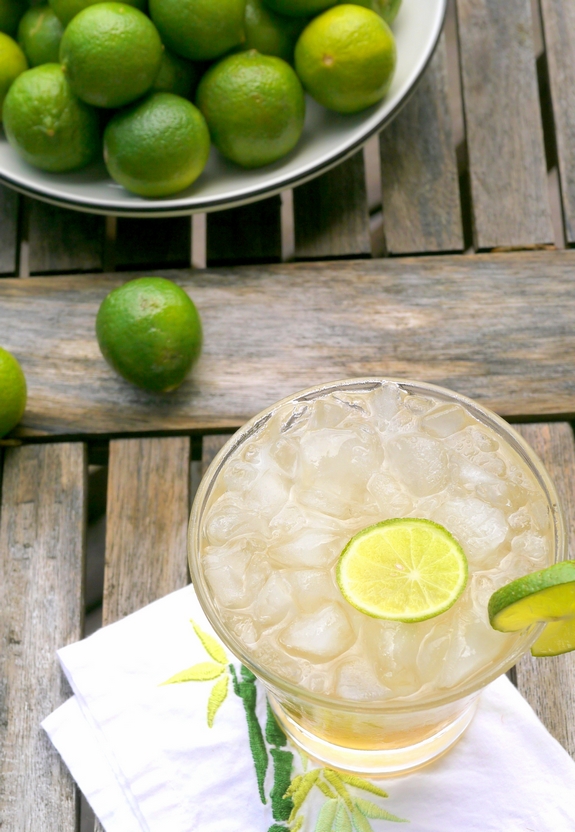 One weekend I had intended to make key lime cupcakes and never got around to it, leaving me with a bag of key limes. In a last ditch effort I decided to use them in place of regular lime juice for a Caipirinha and instead of regular sugar, I gave agave a try. 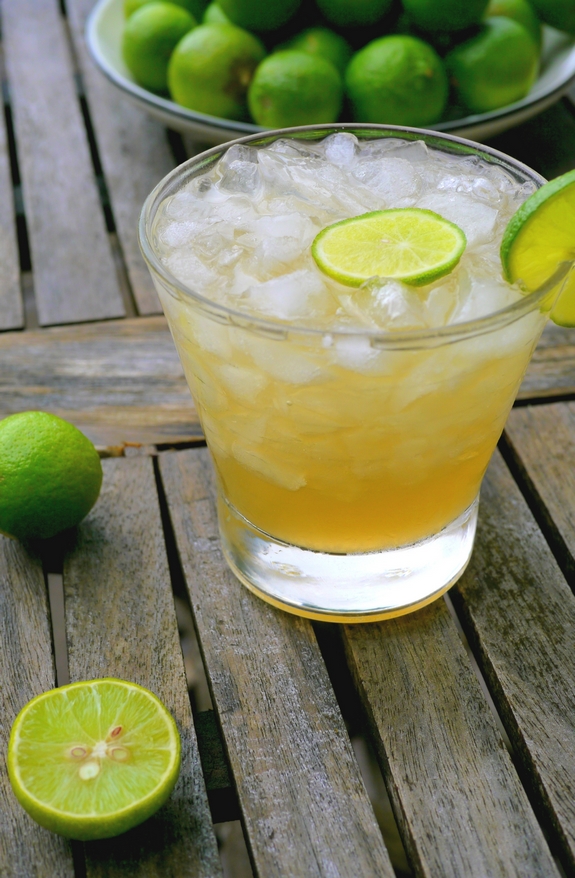 BINGO. BINGO. BINGO. Not only did this drink taste amazing, it tasted better than any Caipirinha we have ever had at a restaurant. The key lime juice gave them a nuance I had not expected and the agave was the right sweetness. Perfect and refreshing. And if I don’t have key limes, I don’t even bother to make them anymore. What a difference they make. 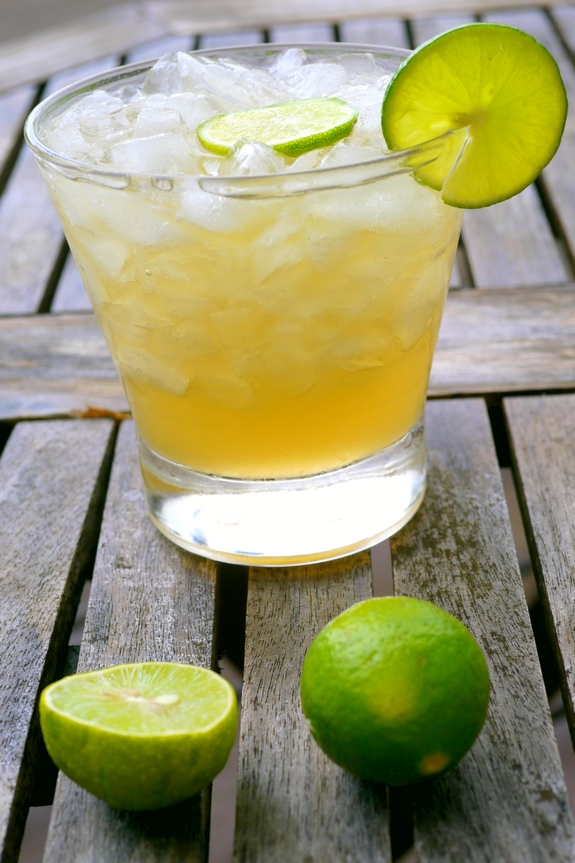 And just for fun, I tried using different variances of agave; light, amber and raw. The amber provided the fuller, rich flavor, which was needed to perfect this drink. Cachaça is sensorally complex and in my opinion the key lime juice and agave rounded out the flavor nicely.

Save this recipe for later, PIN IT HERE.

I guarantee cachaça is hiding in plain site at a liquor store near you. Time to grab a bottle and make it your summer cocktail. Since brands can vary in taste, try looking for the one I mentioned above since I know it tastes amazing.

Why not serve up these delicious Key Lime Caipirinhas with traditional Brazilian fare. I am intrigued by this Moqueca (Brazilian Fish Stew). It sounds amazing. However this Brazilian Black Bean Stew sounds equally as enticing. And who doesn’t adore Brazilian Cheese Bread? You need to try it if haven’t already. And I’m pretty sure you’ll want to serve all of this with Brazilian Coconut Rice…hint, it’s all about the method. And then there’s these Loaded Brazilian Nachos…just wow.

Three years ago I shared a recipe for my favorite Chunky Guacamole and how to keep your guacamole from turning brown. Check it out. And six years ago I made this fun Nutella Waffle Cake. Go see it.

Recipe from: Created by Cathy Pollak for NoblePig.com | Serves: 1