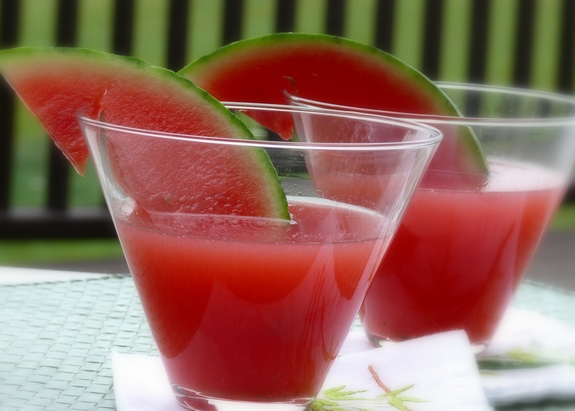 Rum and watermelon come together in this refreshing Watermelon Daiquiri recipe. Don’t let summer pass you by without sipping on its deliciousness.

Last weekend we found ourselves enjoying these beauties. It’s not like the weather was nice enough to have warranted such a cool and refreshing cocktail. However, the watermelon has been so sweet and I bought so many of those baby seedless ones, I had to do something with them.

I’ve also always associated the daiquiri as a frozen drink. However, after a little research, it’s really the name for a family of cocktails whose main ingredients include rum, lime and sugar. Maybe I’m just feeling like I’m still on vacation in Florida, close to where the daiquiri became well known.

Story has it the daiquiri was invented by an American mining engineer who was in Cuba during the Spanish-American war. There is an iron mine in Cuba named daiquiri as well as a beach….hmmm, sounds like we have a connection. Miner…working in an iron mine…needs a drink after work…has only these ingredients in the pantry…proclaims it the daiquiri…shares it with all his friends…gains worldwide popularity? Are you feeling the connection?

Anyway, enjoy this drink, it was so nice to sip on!! This could also be made without the alcohol if you choose, a great option for any guests who might not be drinking. It would still taste great.

Recipe from: Created by Cathy Pollak for NoblePig.com | Serves: 2