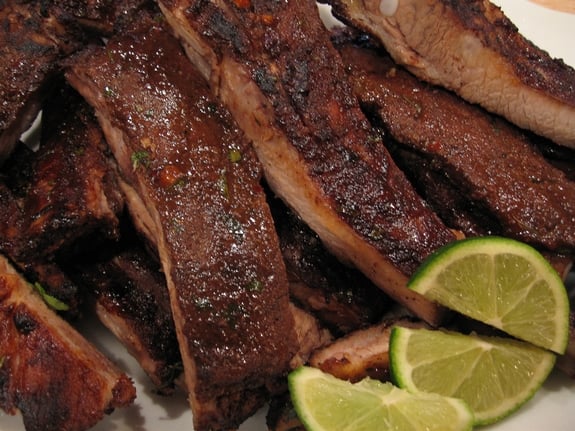 Pork and Asian flavors meld together like a song.  The ginger and lime used to make this dish create a refreshingly unique flavor that makes these ASIAN LIME RIBS seem like an extravagant splurge.  You’ll never go back to barbecue sauce ribs again.  You simply won’t!

When it comes to making ribs, there are some folks who live and die by their technique.  It is an art form.  A way of life.

For me, I don’t have all day to stand by a smoker with that sort of attention and detail.  So oven-roasting is another great option.

Why you may ask?  Well, somewhere I think TV advertising has tried to convince us that Baby Backs are the way to go.  I don’t necessarily agree.

Let’s talk pig anatomy.  I mean, I am the Noble Pig I should know right?  Just kidding, but really go ahead and imagine the side of a pig or scroll up and look at my pig on the top header.

Draw an imaginary line dividing the top half of the pig from the bottom.  From the top is where the tenderloin cuts are taken.  This part of the animal is not exercised leading to less flavored meat.  This is where Baby Backs come from and are really just an extension of the pork chop.  They also have zilch to do with a baby piglet as many people think.  They are not really a rib either.

As far as the lower half of the pig goes, this is where the Spare ribs are located.  The spares protect the breathing parts of the animal and this area is constantly exercised, making the surrounding meat flavorful.  Bacon comes from this area, need I say more.

Overall, for the most flavor, BUY SPARERIBS!

Often people are intimidated by ribs because once they get the giant slab of meat home, they are at a loss how to prepare it.

So before we get started with the recipe I want to show you how to prepare the meat.  Often the butcher can do this for you but if you buy ribs from Costco or a grocery store that does not have a butcher available you will need to follow these steps.  It’s easy, you can do it. 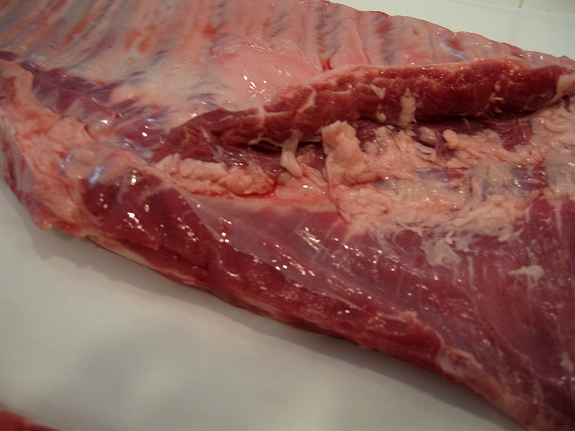 First, there will be a flap (skirt) on the sinew side of the ribs. 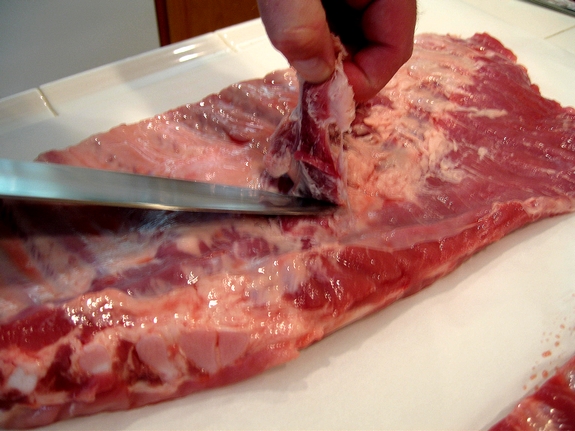 This should be removed.  It can be cooked along with the rest of the ribs if you choose. 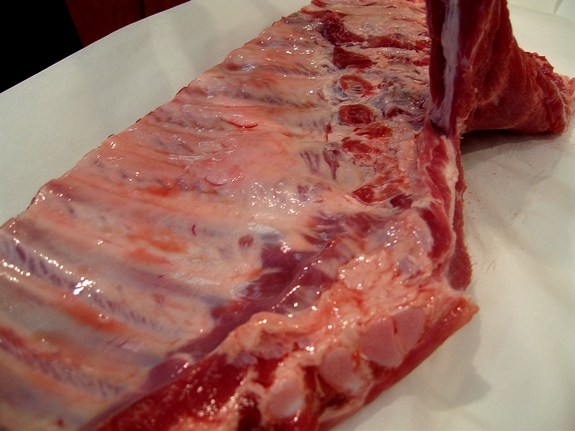 Next, cut off the breast plate and the flexible feather bones that make up the rounded part of the ribs.

This can also be prepared alongside the rest of the ribs.  The breast plate CAN be left on but removing it makes the ribs look more like RIBS in the traditional sense.  When the breast plate is removed, the ribs are referred to as St. Louis style.  Isn’t that authentic?  You want to be authentic don’t you? 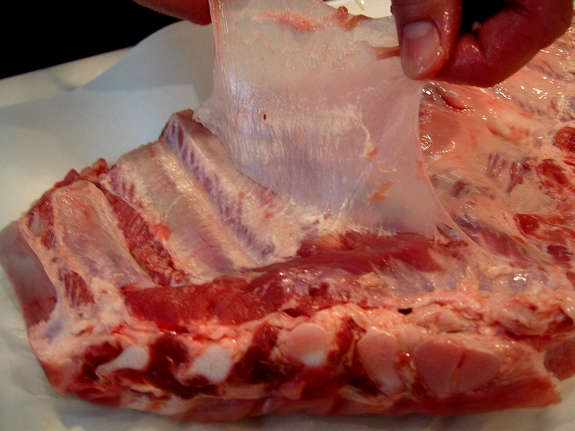 All ribs have what’s called a sinewy membrane that does NOT melt away during the cooking process.  You must remove it.

Start with a knife at one end of the ribs until you loosen the membrane and create a plane across the tissue in order to start pulling.  Continue pulling it away across the whole piece of meat.  Use a paper towel if it is too slippery for you.

Now remove any excess fat from all over the meat. 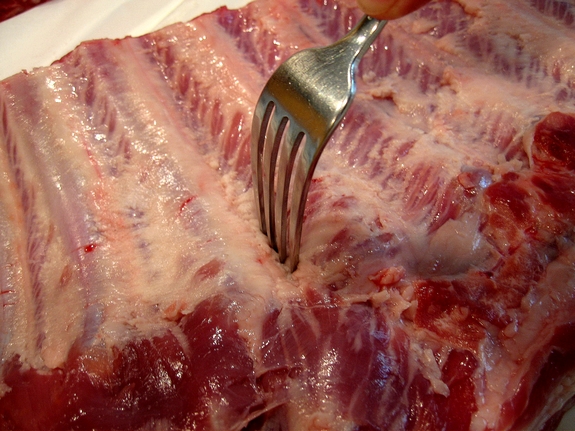 After removing the excess fat take a fork and poke between the bones for extra flavor, this is a technique known as ”docking”.

Now your meat is ready to go!  Let’s prepare the rub. 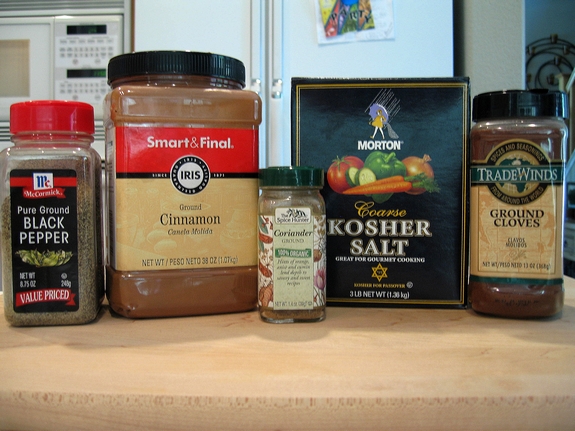 Here is what you will need to make the rub.  Black pepper, cinnamon, coriander, kosher salt and ground cloves.  That’s it! 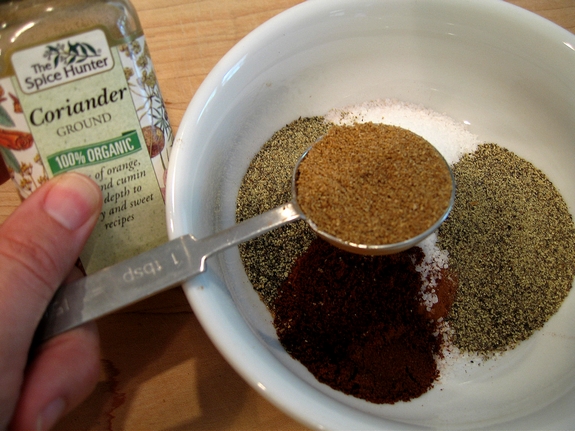 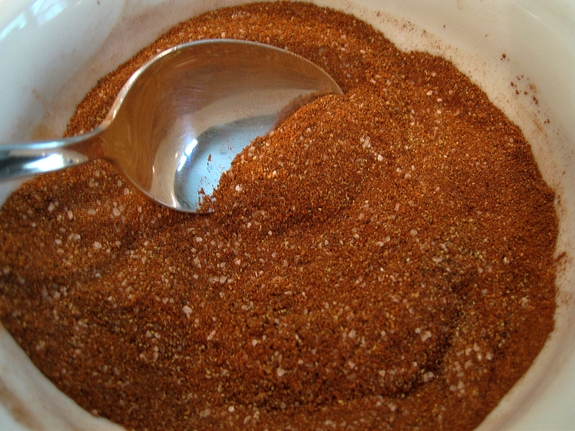 Mix it up and it will be this beautiful reddish-brown color. 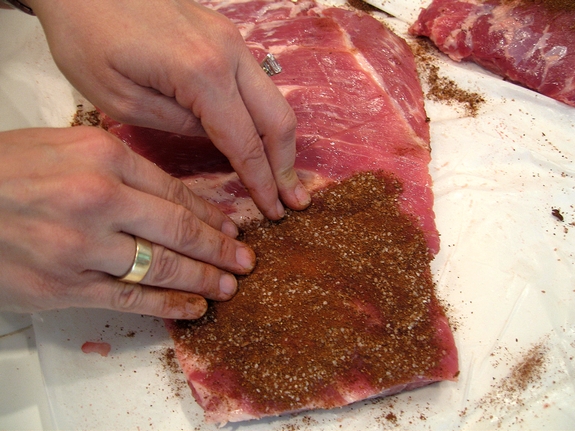 Now massage the rub into the meat, completely covering all sides.  Do this about one hour before roasting.  Any longer is unnecessary.  The flavors will penetrate enough during this time and continue to do so during the cooking process. 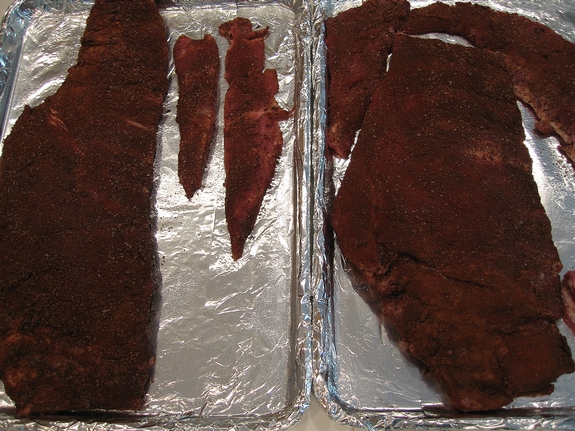 Line pan(s) with aluminum foil (otherwise you will be cleaning them for hours) and spray with nonstick cooking spray.  Place meat on top.  The smaller pieces are the breast plate that was cut off during the trimming of the meat. 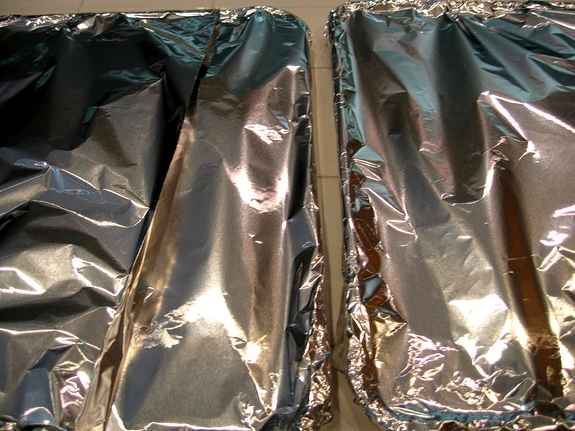 Completely cover the pans tightly with aluminum foil and roast in a 250 degree oven for 2 hours.  When finished, the meat will fall off the bone.  You’ll see.

While the meat is cooking let’s make the glaze and dipping sauce.  It’s so good, you’ll want to put it on EVERYTHING (except dessert of course). 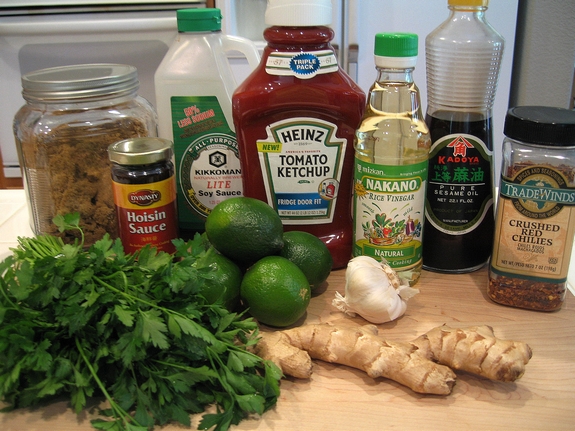 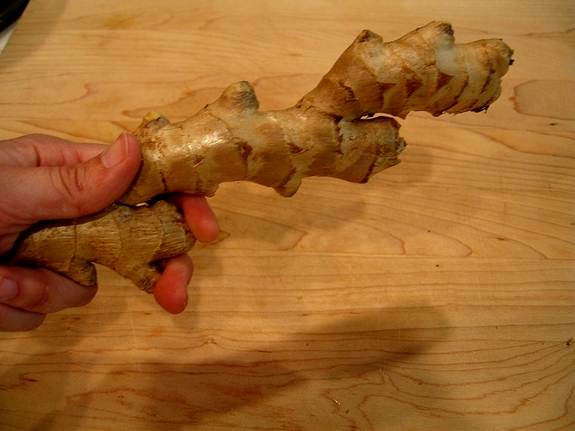 This is a stick up. 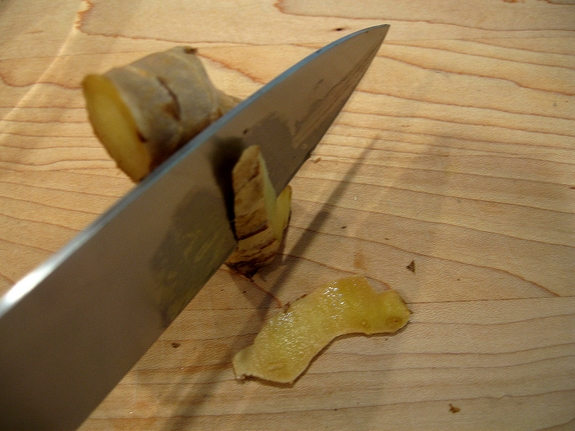 Cut off a piece of the ginger and slice or peel off the skin. 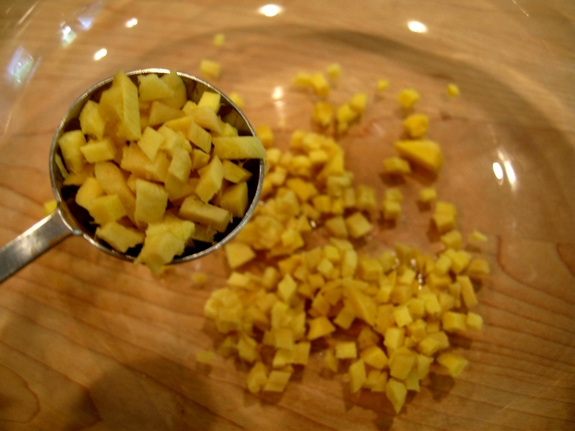 Coarsely chop the ginger adding 2 Tablespoons of ginger to a bowl. 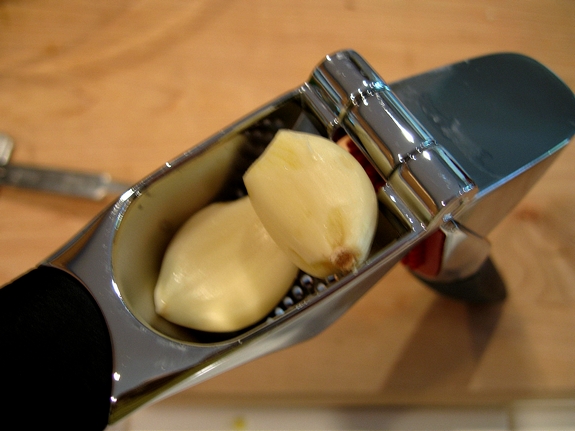 Peel your garlic, you will need about 5-6 cloves, and place them into your garlic press. 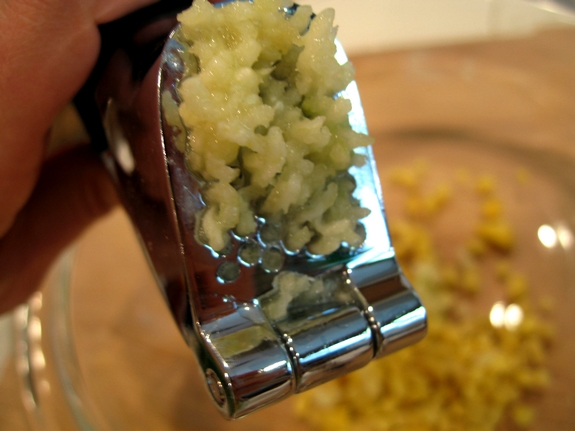 Press the garlic until you have about 2 Tablespoons garlic to add to the ginger. 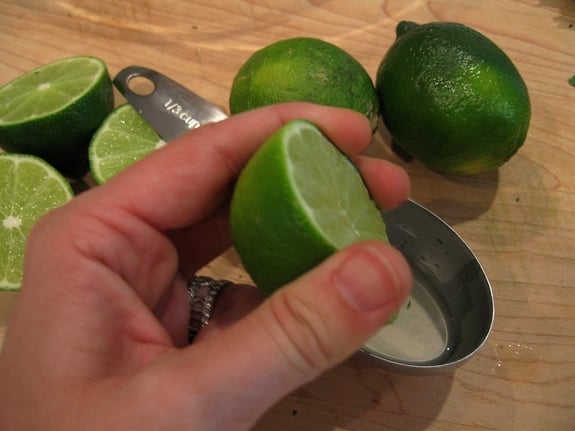 Now for the squeeze.  If your limes are as dry as mine, you might need to ruff up (squeeze really hard) the limes to get the amount of lime juice you need.  Add 1/3 cup of fresh lime juice to the bowl.

Chop the cilantro as finely as you can.  Do your best.  If you can’t do your best, whatever! 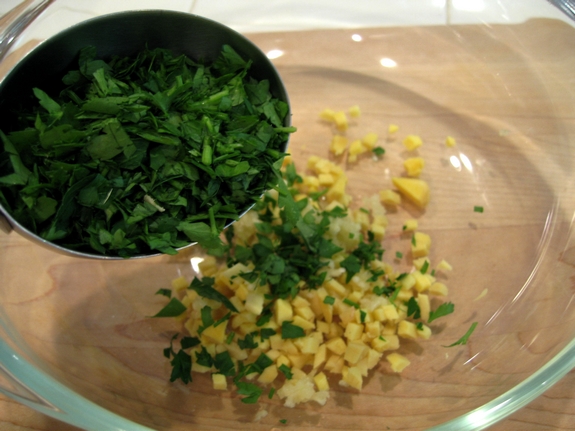 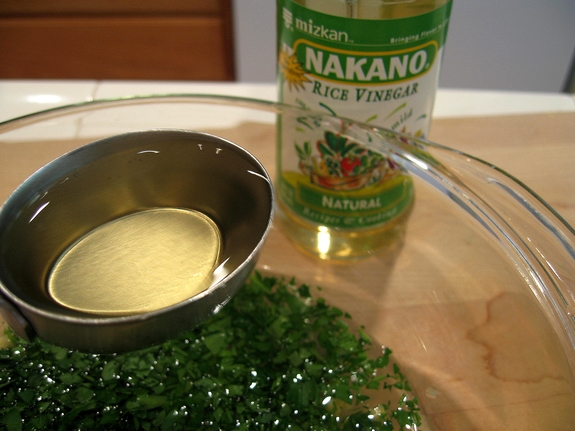 3/4 cup rice vinegar is also added to the bowl.  Do NOT use seasoned rice vinegar, just the regular bottle will do.. 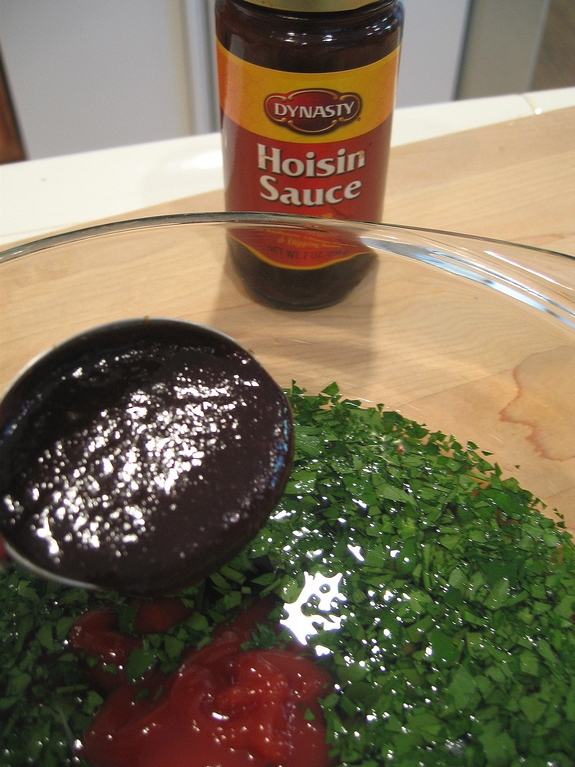 If you’ve never used hoisin before, this is what gives this sauce it’s special flavor.  Hoisin is a sweet and spicy sauce made from soybeans, garlic and chile pepper.  Go ahead, scoop some hoisin out with a spoon and try it.  You’ll see what I’m talking about. 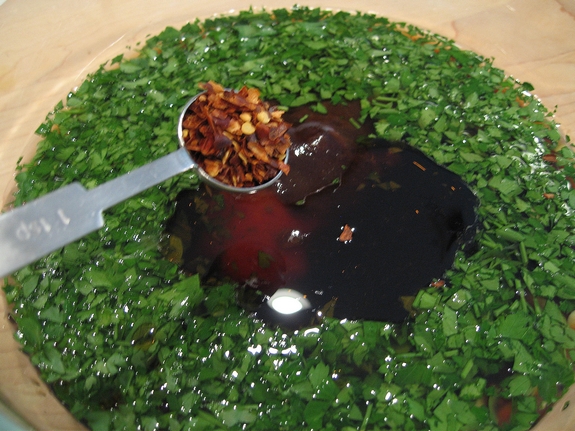 Also, for some extra spice, add 1/2 teaspoon crushed red pepper flakes.  This really kicks it up.  Add more if you love super-spicy food. 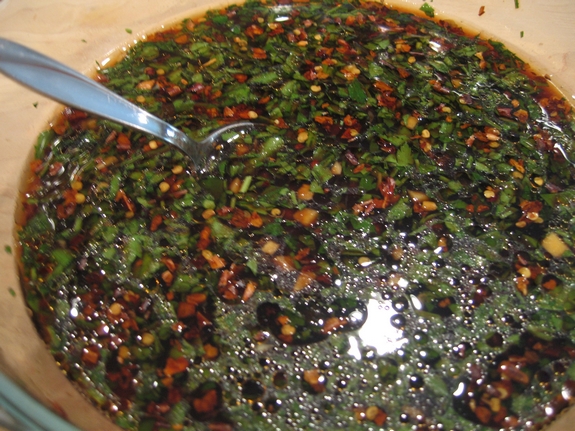 Just mix up all the ingredients and your done!  No cooking required.  Perfect, isn’t it?  Except for the glaring light reflecting back from the sauce.  I’ll get my sunglasses.

Time to take the meat out of the oven.

Oooooh look at that!  It’s puhr-fect wouldn’t you say? 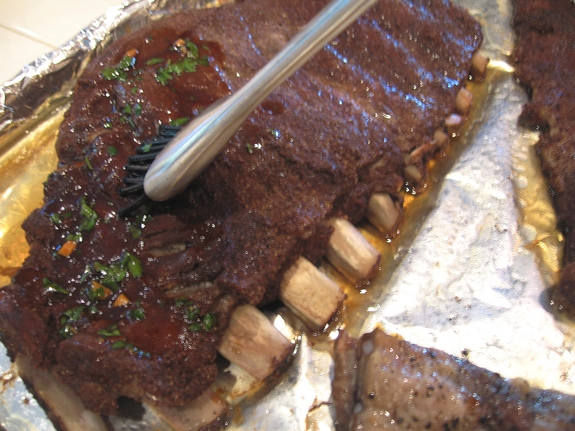 Now take some of your glazing/dipping sauce and paint your ribs well.  Look at that…!

What you are going to do now is char the ribs on the grill.  They are already completely cooked so 15 minutes is all it’s going to take.

But to do this you must first spray the grill with nonstick cooking spray.  Make sure the flame is off.  This sauce has sugar in it so the ribs will stick as they start to caramelize if you forget to spray.

Never spray a grill while it’s on, your eyebrows will not appreciate it.

Preheat the grill to medium-high heat. 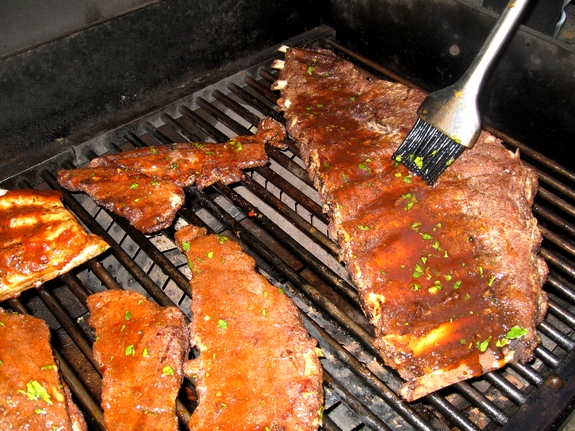 Place the already cooked meat on the grill.  As a little black char begins to develop flip them and brush again with the sauce.

Repeat this process at least twice so the ribs become well glazed and nicely charred.  Again, this will take about 15 minutes. 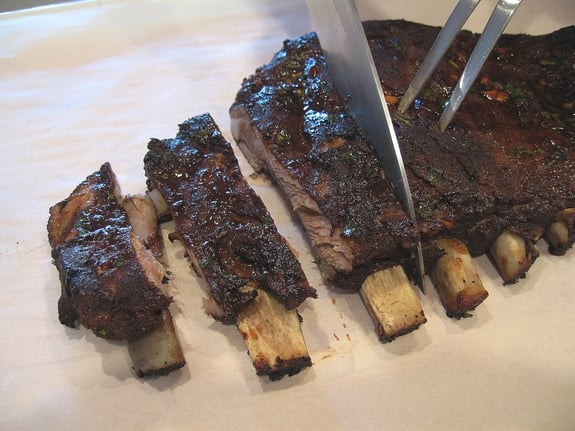 Allow the ribs to rest for about 10 minutes before slicing them.  You just can’t imagine the taste.  They are tender and tangy and really unbelievable. 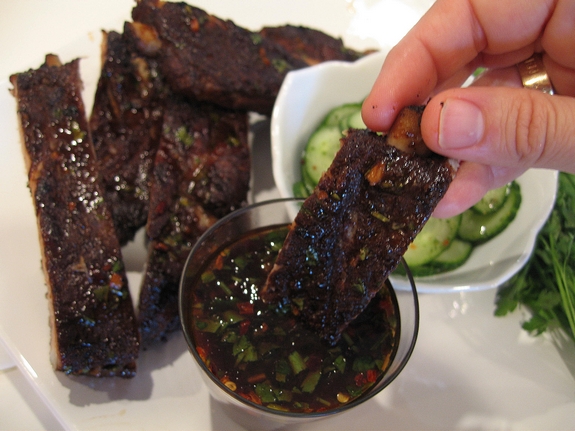 Then take your ribs and serve with the extra dipping sauce.  There are no words for this. 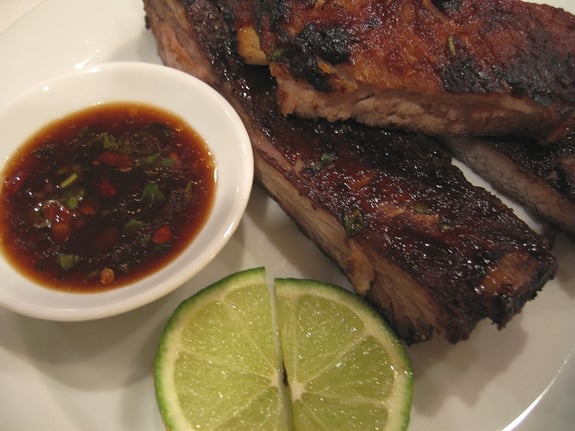 Give each one of your guests a few ribs and some dipping sauce and they will worship the ground you walk on.  They will.  It’s that good. 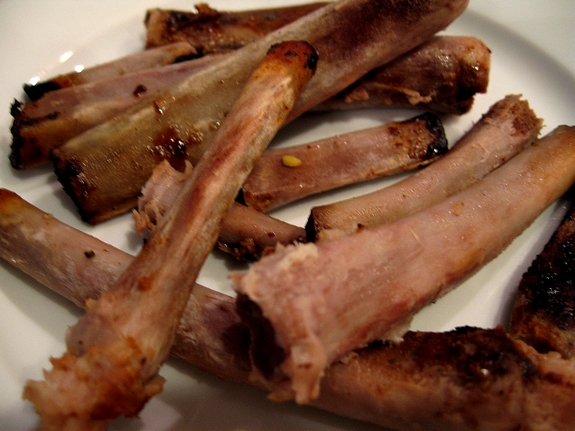 This is all you will be left with.  Piles of them!

Prepare two racks of spareribs as shown.  (This included trimming the meat.)

Combine ingredients for rub and apply to ribs.  Cover and let sit for one hour.  Roast the ribs at 250 degrees for 2 hours, until the meat is falling off the bone.

Stir together ingredients for sauce.  Brush on roasted racks of ribs before grilling.

Grill over medium-high heat a total of 15 minutes.  Serve ribs with Asian-Lime Sauce.

You will love these ribs, I know I do.  I served them with a side of thinly sliced Cucumbers with a Mint Vinaigrette which cooled the mouth between every bite.  It was divine.