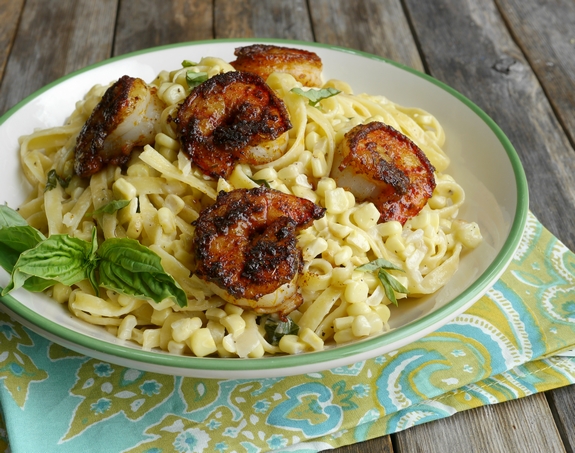 Just in time for summer, this light and delicious Almost “sauceless” Creamy Corn Fettuccine with Blackened Shrimp tastes way more decadent than it actually is! You’ll want to make this as soon as you can.

Almost “sauceless” and “creamy”, how could that be? Let me explain. I love Fettuccine Alfredo, but during the summer months it’s a little heavy. It doesn’t mean I still don’t crave it.

I have made “Lighter” Fettuccine Alfredo and a quick “weeknight” version of Chicken Fettuccine Alfredo. Both are fabulous but I still wanted something lighter, something more summery with a kiss of sunshine. After racking my brain, I decided charred corn, basil an eensy bit of cream (1/4 cup) and some lemon juice would make a perfect summer alfredo sauce. Okay, honestly I didn’t even know if it was going to work.

But it did! It’s not heavy and almost seems “sauceless” but at the same time it’s creamy. I know that’s hard to imagine but you’ll get it once you taste it. Let’s just call it an anomaly.

And I mentioned yesterday I am currently into shrimp, mostly in tacos, but they seem to be appearing in my other dishes too. I couldn’t resist topping this very summery pasta with some blackened shrimp.

Let me set the stage, a bite of the shrimp, with its cajun flavors, the sweet corn and bright lemon taste in the pasta…it’s heaven and summa’ all in one bite. You will make this again and again. 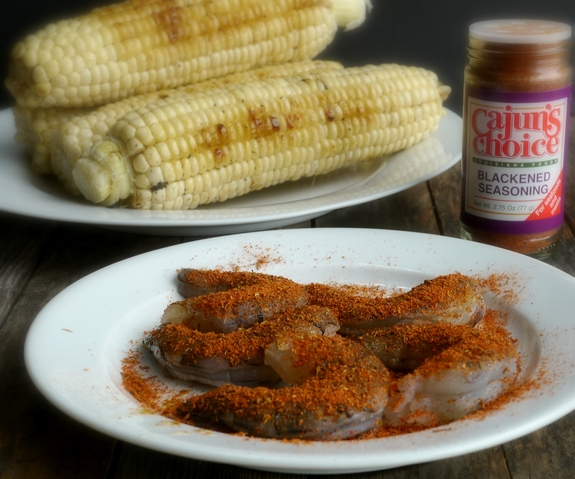 Now, contrary to many beliefs, “blackened” is a seasoning not a method. I know there is some confusion out there. You can make your own blackened seasoning, there are recipes available. However, I find it easiest to just pick some up at the store. It’s not always in the spice aisle so check around the meat counter, that’s where I always find it. 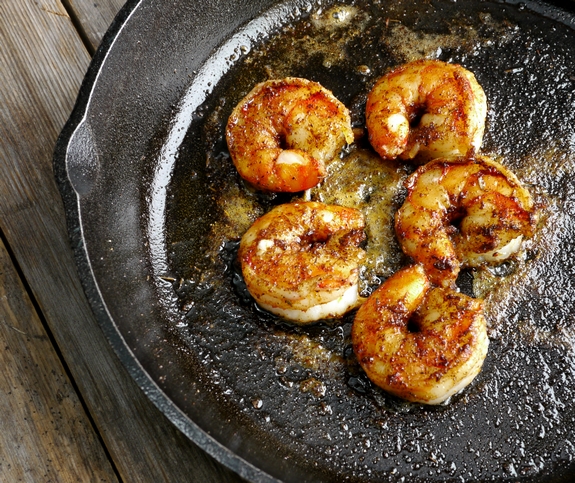 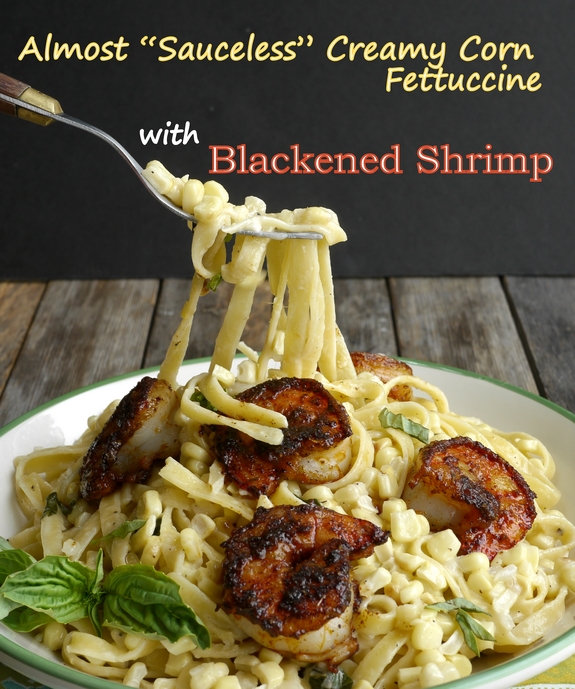 I hope you enjoy this dish, I’m really excited to make it again and again.

SAVE THIS RECIPE, PIN THE IMAGE BELOW FOR LATER.

There are so many fun and delicious ways to prepare fettuccine and I think I’m going to start with preparing this Smokehouse Bacon Fettuccine Alfredo. This Fettuccine with Seared Tomatoes, Spinach and Burrata also sounds amazing along with this Sun-Dried Tomato Fettuccine. When I make this Mushroom and Fettuccine with Red Pepper Flakes, no one stops eating until it’s all gone. This Lemony Fettuccine Alfredo is also blowing my mind.

One year ago I made these Oven Baked BBQ Fries.