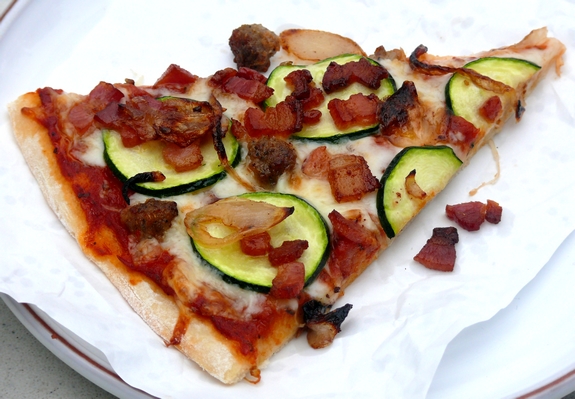 Did I really think my husband and boys were going to eat the zucchini I left for them this weekend?  Not really.  I’m actually afraid to ask what they consumed for the days I was gone.  I know for a fact it wasn’t zucchini, watermelon, grapes or anything else that might have been slightly healthy.  It was all still in the fridge!

I was actually inspired to cook with the zucchini when I returned home.  My weekend-away meals were filled with an array of fresh vegetables picked straight from Kendall-Jackson’s winery gardens. I wanted to re-create those flavors at home.

But because my husband was at first horrified seeing me place zucchini on pizza, I added some “man” toppings, like bacon and sausage to appease his tastes.  In case you are wondering….he loved the pizza. LOVED IT.  It came out fantastic!! The zucchini took on the flavor of the bacon and the sausage so nicely.

Why can’t you have some green on pizza? Give this one a try and add anything you like.

Preheat oven to 450o F.  (I used the convection setting of my oven and pre-heated to 435o F.  Convection does cook faster and at lower temperatures.)

Start by preparing your toppings: Shred your cheese, slice zucchini, chop bacon and slice onions.   Doing this first makes the process much smoother.

Let your pizza dough dough stand for 15 minutes, covered, before you roll it into a 12″ circle on a prepared baking sheet.  Spread the sauce over the dough, leaving a small border (maybe 1/2″).

Fry bacon until almost crisp, it will cook more in the oven.  Remove bacon and fry shallots in the bacon grease until slightly browned.  Remove shallots and wipe out the pan (its okay to leave it a little greasy).  Add sausage to pan; cook 3 minutes, stirring to crumble.  Remove from pan.

Rub zucchini slices with a small amount of olive oil and sprinkle slightly with Kosher salt.  You do not need much of either of these ingredients.

Spread sauce over dough, leaving a slight border.  Top with cheese and then zucchini slices.  Sprinkle bacon, sausage and shallots evenly over the zucchini.

Bake for 12-15 minutes or until cheese is browned and crust is golden.

You are going to love it.