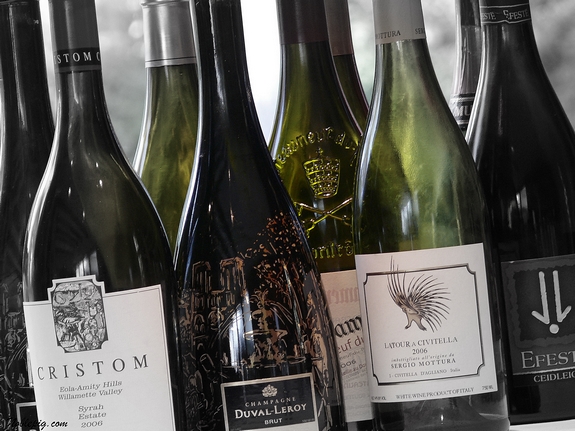 I receive lots and lots of emails when I post a recipe with alcohol included in the ingredients.  “Can I substitute water, broth or juice for the alcohol?”  The reasons for the substitute are all different and the answer is always yes, you can.  However, cooking with wine, beer and spirits is more about how the alcohol improves flavor perception in a couple of very different ways.  Alcohol actually helps the cook in the kitchen more than it does in creating a civilized atmosphere at the dinner table.

Just like salt, alcohol brings out the flavor in food.  Alcohol does this by evaporation and molecular bonding.

Think about what happens when you open an aged bottle of whiskey.  Once the cap is off, you immediately get a whiff of overwhelming aromas.  The reason this occurs has to do with the volatility of alcohol molecules, meaning they evaporate rapidly, reaching your nose quickly.

This is also what happens when strawberries are macerated in Pinot Noir or a splash of schnapps is added to a fruit salad, you are helping convey the fruit’s aroma to the nostrils, ultimately enhancing the overall enjoyment of the food.  However, this “volatility effect” works only when low concentrations of alcohol are present.  At or more, the alcohol will dominate any fruit aroma you were trying to bring forward.

Food is also the beneficiary of alcohol’s ability to bond with both fat and water molecules (is biochemistry coming back to you now?).  In this way, alcohol bridges the gap between our aroma receptors (which respond only to molecules that can be dissolved in fat) and food (which consists primarily of water).  This is very important because most of the great “flavor” in food comes from aromas in the nose rather than tastes in the mouth. (This is why you really don’t taste anything when you have a stuffy nose.)

Let’s think about this in terms of making a marinade or a brine with both water and fat soluble ingredients.  If you take the flavor compounds in certain aromatics such as garlic, herbs or other fat soluble ingredients, alcohol helps carry those compounds into the meat that’s soaking in the marinade or brine.  But alcohol also helps carry water soluble flavor compounds into the meat as well.  Water soluble flavors would include sour, sweet, salty and bitterness.  With alcohol’s effort, the result is more flavor and aroma into the marinated food.  Even one tablespoon of a neutral-tasting vodka considerably improves the flavor penetration of any given marinade.

The same thing is happening when a piece of meat is basted with alcohol during cooking.  Flavor compounds are being carried into the meat, improving its flavor.

The same concept is seen when creating a reduction sauce.  Deglazing the pan with wine after searing meat not only releases the proteins stuck to the pan, but by dissolving these browned bits in alcohol, you are carrying additional flavor to the sauce.  Using a nonalcoholic alternative leaves you with a sauce less intense in flavor.

Just remember when it comes to flavor-enhancement with alcohol, less is always more.

Does Alcohol “Burn Off” During Cooking?

Well, it depends, and is determined by several factors: how much heat was applied, the dimensions of the cookware, cooking and standing time and most importantly…how much alcohol was added.

Let’s say you making flambe, a very miniscule percentage of the alcohol is retained in the dish.  However, a mixture that has been simmered or baked for an hour will retain an even smaller amount of the added alcohol.

I hope this answers some of your questions and provides understanding as to why we cook with alcohol.