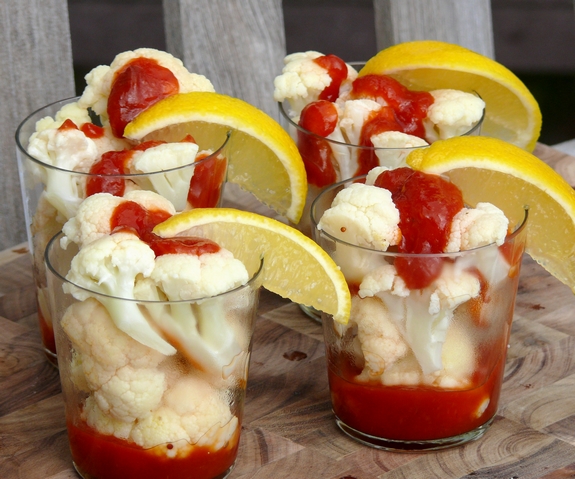 I was flipping through the pages of the February issue of Bon Appetit magazine when I came across this recipe.  It was in the section where people write in asking for favorite restaurant recipes.  I thought it was such a strange concept I had to try it. And yes, it’s perfect for anyone vegetarian or who might have a shellfish allergy.

Here was the commentary from Bon Appetit….”Dear Bon Appetit, I’ve never had anything like the cauliflower “shrimp” cocktail at The Black Sheep in Richmond. My wife can’t eat shellfish, so it’s perfect for her.”

“Chef Kevin Roberts transforms humble cauliflower into a dead ringer for shrimp cocktail with a brief poach in cleverly seasoned water and a dunk in cocktail sauce.”

I had to try it. I had everything at home and wanted to see if it faintly resembles the shrimp I know and love.  Weirdly it did. The flavors are not overwhelming and it does not taste like cauliflower. It’s different. And good. And most definitely clever.  I had to share it.

I do agree that it’s a great option for anyone with an allergy or is vegetarian.  Or maybe, you just don’t have any shrimp around.

Arrange room temperature or chilled cauliflower on a platter or in a serving cup with cocktail sauce for dipping.