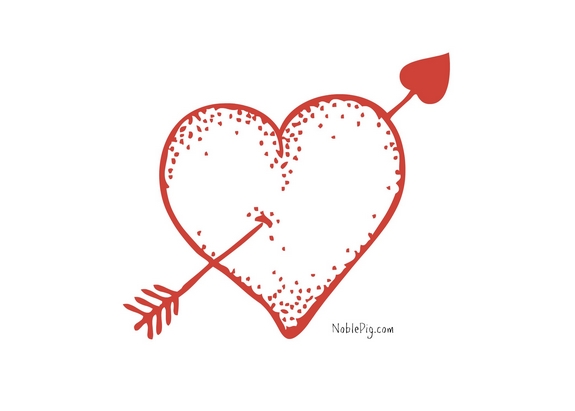 Looking back fifteen to twenty years ago, I am amazed at the weighted significance I placed on Valentine’s Day gift giving.  It was forever the holiday filled with potential of making or breaking a relationship.  Those feelings all seem so ridiculous and childish now, but then, with very little relationship maturity under my belt, it all made logical sense.

When it came to giving the “right Valentine’s gift” I placed a lot of energy and time concocting my gift giving plan of attack.  I completely lost sight of what the celebration was about. Love. Right?

I distinctly recall dating a “certain guy” at the young and clueless age of twenty.  We had only been going out for a short time and Valentine’s Day was quickly approaching.  I know…..the pressure.  There is nothing worse than an impending holiday like Valentine’s to put a young relationship to the ultimate test of failure or success.  At least that’s what I thought.

I was of course ecstatic.  I made this “certain guy” a very clever card, had a picture of us framed, made him my,”Yes, you will fall in love with me Chocolate Chip Cookies” and bought him a shirt.  I know the shirt sounds lame, unimaginative and pathetic, but believe me when I tell you it was a very cool shirt.  It. Really. Was.

He was picking me up at seven and we were going to a party at the home of a mutual friend.  I think my heart skipped a beat when I heard him knock on the door.  I knew he would have the ideal gift.  A perfect present relaying exactly how he felt about me.  Something romantic, something personal, the ultimate souvenir of our fresh, new and shiny relationship.

I opened the door only to have my worst fears materialize.  My perfect guy, the one who I had secretly planned my whole life around, was standing there holding a long stick wrapped in white, crumply tissue paper with two purple bows tied at each end.  It appeared as if this stick had rolled around in his car for two weeks.  I knew I loathed it without even knowing what it was.

We sat down on the couch, I handed him the cookies, the shirt, the card and the picture.  He passed me the very heavy, crumply-white-tissue-papered stick.  I could not even imagine what it could be.

I tore into it cautiously.  What I found was even worse than I anticipated.

It was a barbell.

Yep.  Just a barbell.  About five feet long and thirty pounds.  Nothing else.  Zippo.  The barbell.  Right there.  The perfect symbol of our relationship.

I think he detected my bewilderment and possible antipathy as I sat there staring at the metal stick looking a bit perplexed.

However, it was his words that put this wide-eyed, “all relationships are perfect” twenty-year old over the edge of what she could handle.  He said, “Isn’t it great?  For your birthday, I’ll get you some weights to go with it.”

First, my birthday was six months away. And now I knew for my twenty-first birthday, the birthday I currently considered to be the birthday of all birthdays, I was going to get weights to partner with the detested barbell.

Was he kidding?  A lone barbell and no weights for six months?  And let’s be clear, I never hinted a barbell was something I was interested in, this was entirely his creativity at play here.  I was crushed.  This was the best he could do?

Didn’t he know the future of our four imaginary children, house in the burbs, great careers and unforgettable family vacations were riding on this one gift?  Apparently not.

You can believe my self-absorbed, bad, bratty-self sulked all-night.  We broke up two days later.  My perception of his thoughtlessness was also exponentially compounded after I discussed his choice of gifts with other relationship experts, my posse of other twenty-year old girlfriends.

Retrospectively, I should have been impressed by the suggestion that my “certain guy” imagined us together six months later and chalked the gift up to you win some, you lose some in the gift receiving department.  However, life immaturity would not allow the type of enlightenment and forward thinking necessary for that to occur.

Interestingly, seventeen years later, my husband and I never exchange gifts on Valentine’s Day.  We can’t imagine having to choose an item that could possibly come close to expressing how we feel about each other.  We try everyday to do things for each other that enriches our lives and the lives of our children.

Yes, we celebrate the holiday with a marvelous home-cooked meal, fabulous wine, thoughtful gestures and sometimes just a high-five.  However, roses, diamonds and thankfully barbells are not part of our Valentine’s repertoire.

I originally wrote this for Los Angeles based magazine, One For the Table…but I just had to republish it for Valentine’s Day…it still makes me laugh.

One Year Ago: Grilled Glazed Pineapple
Two Years Ago: This is Why We Love