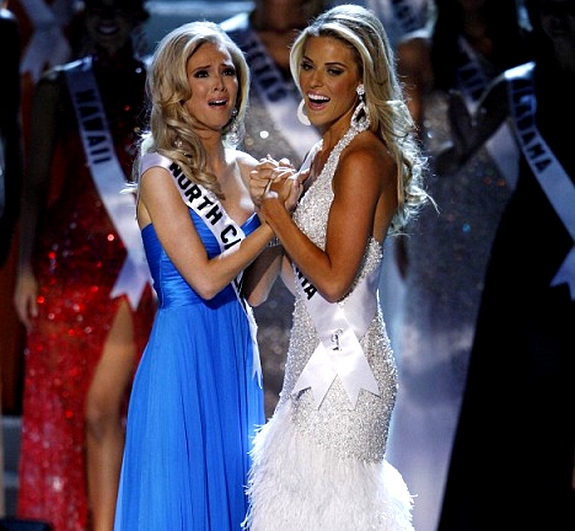 Don’t you hate it when the beauty contest gets ugly?  I mean for me, the Miss USA Pageant is so yesterday but it does exist.  So let’s talk about it.

As many of you know, Miss California, Carrie Prejean, was favored to win the current 2009 pageant.  Her final challenge to the crown being to answer one question from the panel of five judges.

She chose celebrity blogger, Perez Hilton, an openly gay male, to ask her the question.

Hilton: ‘Vermont recently became the 4th state to legalize same-sex marriage. Do you think every state should follow suit. Why or why not?’

Prejean: (paused for a moment before replying) ‘Well, I think it’s great that Americans are able to choose one or the other. We live in a land where you can choose same-sex marriage or opposite marriage.  And you know what, in my country, in my family, I think that I believe that a marriage should be between a man and a woman.  No offense to anybody out there, but that’s how I was raised and that’s how I think it should be – between a man and a woman. Thank you very much.’

She lost the Miss USA title based on this answer apparently because Perez voted her down.

He went on to call her a dumb bee-otch on his blog (in a vlog post) and has been very vocal about how he feels about her answer.  He said he would have jumped up and ripped off her tiara had she won.  He’s very mature.

Now, my question is, should the Miss USA Pageant allow questions by judges that are so obviously personally biased?  Of course Perez Hilton would have a problem with an answer that did not agree with his lifestyle.

And it doesn’t matter what the topic is…should they be allowed to ask such biased questions and then judge them based on personal feelings and not the eloquence of their response?

I think his question should have been thrown out and disqualified.

I would feel the same way if the question had come from a judge who vehemently opposed gay marriage and then judged punitively based on the response.

Shame on the Miss USA Pageant for allowing it.

Remember, this is not about gay marriage but about fairness to the contestants.  I really don’t care what her response was.  It’s not the audience who votes; it’s the judges.  I know, I know it’s just about entertainment and ratings to get commercial dollars.  But what lessons are learned by the viewers?

Would you as the viewer, rather have an honest response or a politically correct one just to win?

Does anyone see it any other way?