Still on the road today.

We drove through the Mt. Shasta area, which could have been breathtaking, if it wasn’t for the wildfire smoke that has blanketed Northern California and beyond.

This was my first time to see Mt. Shasta; it’s quite majestic at approximately 14,000 feet high.  I wish I could show you a photo but the smoke hid its beauty from the camera .

We continued on and ended up here….. 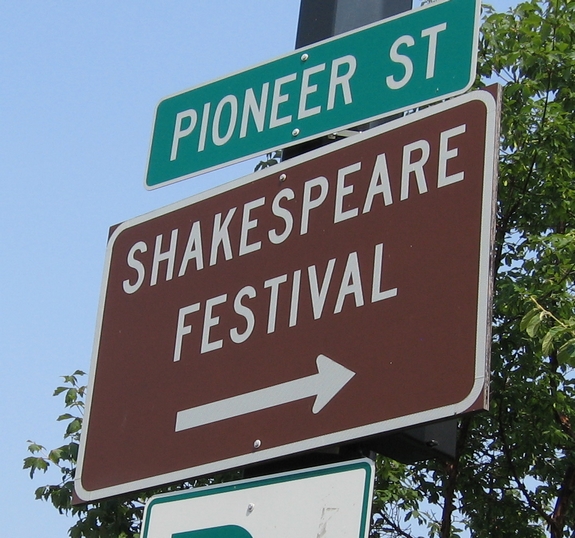 I’m sure many of you recognize this sign…only to be found in Ashland, Oregon.  Ashland is famous for its eight month of performances of various Shakespeare plays.  I cannot even tell you how beautiful the outdoor theater is.

How I would love to see Othello performed on the Elizabethan stage.  Oh well, some other time.

But let me say this town is one of the more interesting places I’ve been to and it’s impossible to capture in one photographic swoop.

I have not had a more interesting time in years when it comes to people watching.  I’ll leave it at that.

The town itself is gorgeous with great restaurants and shops galore.

Of course because Ashland is in the Rogue Valley we had to have lunch at a brewery to try some of the great microbrewed beers made there. 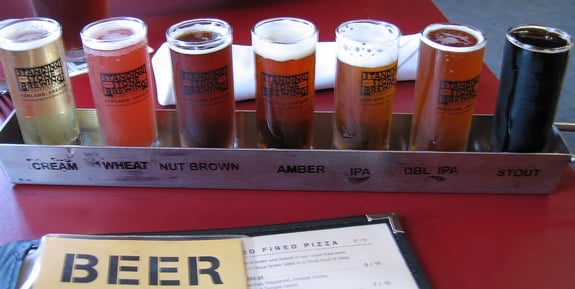 I had to have the complete tasting menu so I could try them all.

My favorite was the Double India Pale Ale (sixth from the left).  This was an unfiltered ale that boasted intense hop bitterness and was very malty.  Full of flavor, I loved it.  A close runner up was the unfiltered Marionberry Wheat beer (second from the left).  This is made from Oregon Marionberries (a cross between blackberries and raspberries).  The berries give the beer a great pinkish-red hue and a nice tart finish.

Thank gawd the brewery had a wall of toys to play with because the service was so slow.  It was alright though, I had seven beers in front of me…what could be so bad? 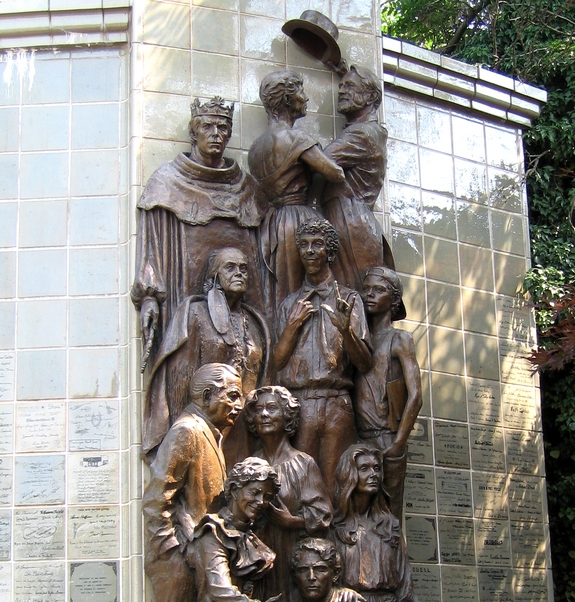 The town is eye candy from beautiful architecture with craftsman homes to lovely sculptures like this one.

But then we came across this spigot.  If there are boys and a spigot of running water you can guarantee they will turn it on.

When they did a little old man came running out of an information booth with a cup.

He said everyone comes to Ashland for its great water.  That should have been my first clue.

He filled the cup and gave me the nastiest water I had ever tasted!  He laughed and thought it was hilarious as he pointed to this sign.

Read the last paragraph.  Yep, sulfur water.  It was disgusting.  The old man duped me and my day only got stranger. 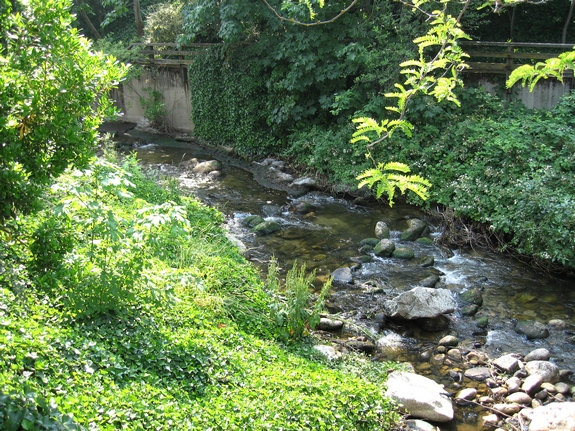 See this creek, it runs throughout town and is a great example of the lush and green city scenery.  There was a path to walk on by the creek which is what we ended up doing.

As we were strolling, I started to feel like someone or something was watching us. 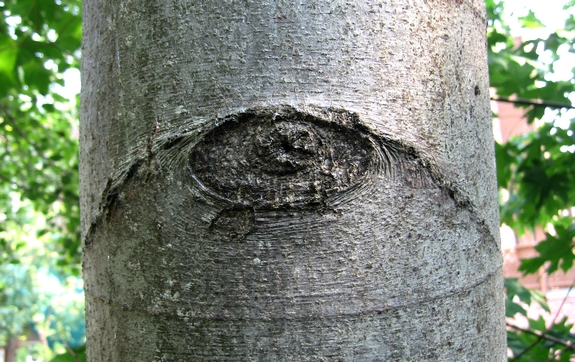 I don’t know what it was but it felt like eyes were everywhere. 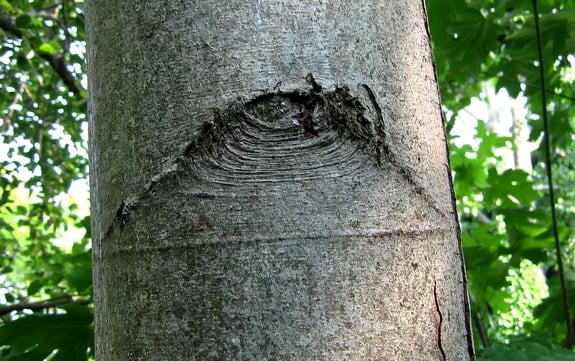 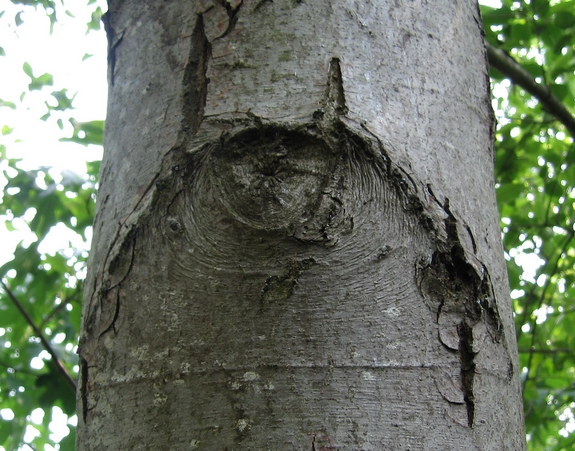 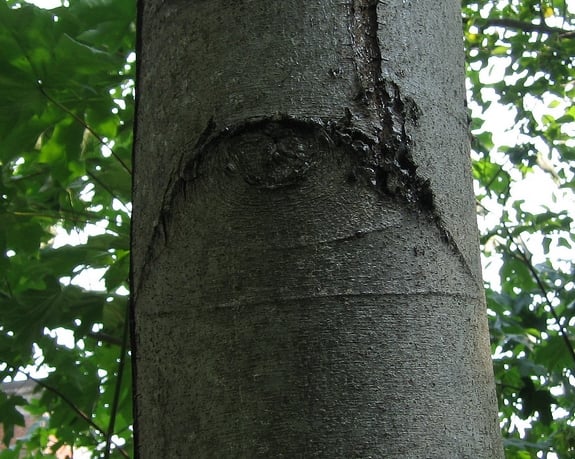 Even eyes that needed some definite Botox injections…

So as we continued to meander along the creek’s path we found something sitting on the railing that just floored me.  I couldn’t believe it.  What were the chances. 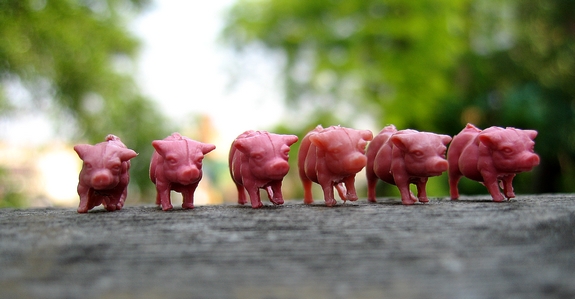 Six pigs all about the size of my fingernail.  I have never laughed so hard in my life.  What were six pigs doing on the railing of a creek.  I would not let the kids take the pigs as I thought they were there for some special reason.  I can’t even imagine what.

I thought my day was perfect after I found the pigs.  It was so fitting.

However several hours later in my hotel room, the hooligans were jumping standing on their bed and my oldest hooligan starts yelling, “There’s a man up here, there’s a man up here”.  Of course he’s pointing to the fire sprinkler above his bed.  I am looking at him like he’s crazy.  I told him he was seeing his own reflection in the metal.  “No, Mom it’s a Ninja Man!  Look!  You have to look, Puh-leaze look!!”

I get my lazy self up, climb up on his bed and find this… 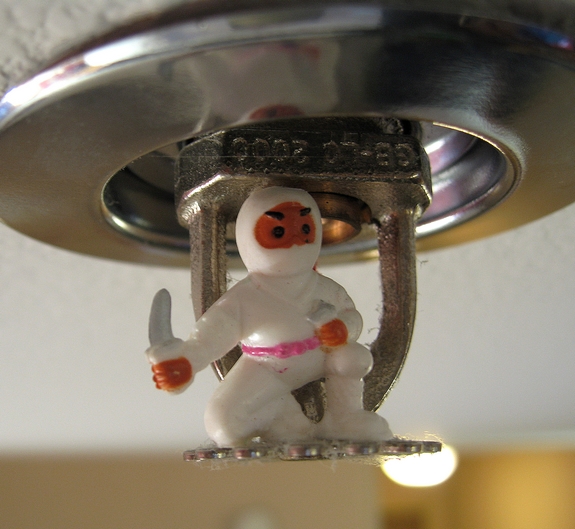 On the ceiling, perched on the fire sprinkler, is a tiny Ninja person just waiting to be found.

I couldn’t believe I had another plastic miniature experience.  What were the odds?

This find might have made my whole trip.  I laughed so hard I fell off the bed and bruised my elbow.

Since I always think everything is a sign, what the heck does this mean?

I think I need to place Ninja next to the pigs on the creek path and continue the love.

It’s also obvious where the cleaning staff forgets to dust.

1shares
« Are There Burglars At My House?
Buttermilk Citrus Shakes »