One of yesterday’s top news stories was coverage of President Bush’s final farewell trip to Europe as President of the United States.

Bush was in England meeting with her majesty, Queen Elizabeth ll. The reporters were filming Bush and the Queen (with Mrs. Bush and Prince Phillip three steps behind) giving the First Family a personal tour of Windsor Castle.

However, what struck me as funny was Queen Elizabeth walking, chatting and pointing out things all the while carrying her PURSE!

Why does she always, always have that purse with her? She’s in her house for gawd’s sake carrying that bag around! Why?!

What the heck is in there?

Let’s be honest, doesn’t the Queen have maybe, ump-teen ladies-in-waiting? Are these woman not hanging out on the sidelines of her life, ready to jump on every need and want she could possibly request at any moment?

I know her castle is gi-normous and I’m sure getting back to the bedroom for a quick cosmetic touch up is a sheer pain in the neck, but if it’s her hanky or tube of lipstick she can’t live without…can’t one of her people carry it for her? Must she carry the clunker clutch with her everywhere?

So what’s in there?

All of England’s launch codes for nuclear warheads? Tic-Tacs? She’s too old for tampons. Snacks (I’m sure everywhere is too far from the kitchen)? Treats for the Corgi’s? Hemorrhoid Cream? Pepper Spray?

I mean what could be so important that the QUEEN has to carry it herself! Always.

This must have been a previous presidential trip to England.  She’s still got the bag.  George looks like he wants to swipe the purse and run.  Even he is a little curious about the contents of the royal purse. 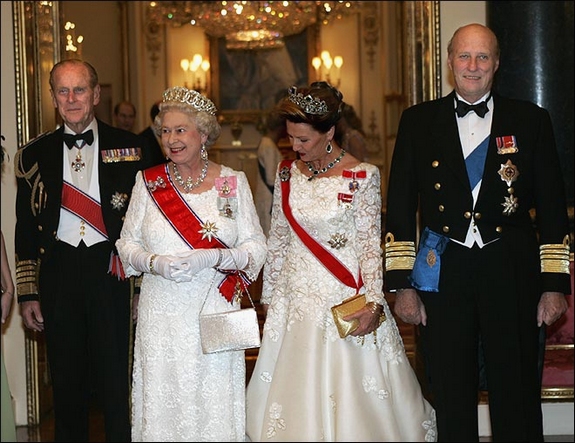 Can you imagine wearing a crown and needing to carry a purse?  Maybe she has a diamond polisher in there.  I think the woman next to her has the same concerns I do.  She had to bring her own purse out of politeness to the Queen. 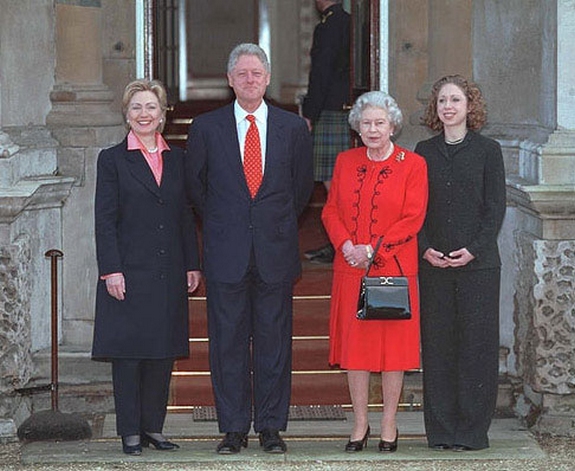 There she is with The Clinton’s.  Same type of black bag but with a different gold doo-hickey.  Hmmm….Do you think she has any Coach or Dooney & Burke?

There are even pictures of her in parades carrying a purse.  Why do you need a purse in a parade?

I wonder if Majesty Magazine would have all the answers?

So does anyone know WHAT’S IN THE QUEEN OF ENGLAND’S PURSE?  I’m intrigued.