When I decided to have a baby I had no idea what kind of challenges, life altering commitments and rewards I would be in for.

I remember going from one day to the next not having any feelings of wanting a baby to wanting nothing more than to have one.

Because the Wild Boar was an OB/GYN, the whole “getting pregnant” process was very scientific, planned and carefully carried out.  How romantic right?  That’s how we roll.  We have a goal, we execute a plan, we make it happen.

I went off the birth control pill, which I had been taking for seven years.

I waited two weeks, which would have been the approximate time for ovulation to occur.

I met the Wild Boar at his office so he could perform a follicle study on my ovaries with the ultrasound machine.  This would check to see if I was ovulating.  Normally this is not done unless you are having infertility problems, but heck if your husband has an ultrasound machine, you’re going to make use of it.

And how many kids have an ultrasound picture of themselves as an unfertilized egg in their baby book?  Mine does.

It just so happened I WAS ovulating and the next 24 hours were the optimum time to get pregnant.

We did what we needed to do.

It’s funny because I knew I felt differently about a week later but the Wild Boar said it was my imagination.

At about 10 or 12 days after ovulation (sooner than a pregnancy urine test would have shown positive) the Wild Boar drew my blood at home (he’s kind of handy that way) before he went to the hospital to make rounds.  He dropped my blood off at the hospital lab for a pregnancy test.

A positive blood result is measured as anything greater than 5 Beta HCG IU. As pregnancy progresses Beta HCG IU can be as high as into the tens of thousands.

My result came back 12 Beta HCG IU.  Geez, I was probably hours pregnant.  If he would have drawn the blood any sooner the test would have probably been negative.

“I knew it!”  I told him.  He was honestly surprised.  I think he assumed after being on the pill for so long it would take my body a while to adjust and therefore get pregnant.

I was very proud of myself.  (As if I had any control over it.)

It was fun being pregnant for the first time.  Everything is done for you, you sleep when you want, and you obsess about the baby’s new room.  I remember being nine months pregnant and up on a ladder, while having contractions, stenciling stars on the nursery walls as if it were some type of an emergency to get it done.  If I didn’t finish, I thought the baby would know his room wasn’t absolutely perfect.

I was induced into labor two weeks early.  I wasn’t even dilated a centimeter.  I went into the hospital and my doctor (the Wild Boar’s partner) broke my water and left to go see his patient’s in the office.

The Wild Boar brought a stack of newspapers, assuming labor was going to take all day, typical for a first baby.  But first he took off down the hallways to make rounds on all of his own patient’s.  I did not feel this was fair, it was my day, but I was stuck in a hospital bed where my water had just been broken. I really couldn’t do anything about it.

The nurse was with me and I told her I was having excruciating pains.  This was all happening only a very short amount of time after my water was broken. I hadn’t even been given Pitocin yet (medicine given to help start labor when you are induced).

I know the nurse didn’t believe I was in so much pain and chalked it up to the doctor’s wife acting like a princess.  I’m sure she went back to the nurses station to talk about me with her nurse buddies.

I was literally gripping the side of the bed thinking I was going to die.  I went from having not as much as a twinge to my eyes rolling into my head.  I begged (probably screamed) for her to find the Wild Boar.  She said he was on the phone in the hallway and she didn’t want to interrupt him.

I told her to get her head out of her butt and get him!  I was in so much pain I thought I was going to vomit.  The contractions were coming so fast and so strong.

I know in her mind she was thinking, a half hour ago when I checked her, she hadn’t even dilated a centimeter.  She finally agreed to check me (before she would get the Wild Boar) and confirmed I was dilated to EIGHT!

She was shocked, “Oh my gosh you’re in transition, just from breaking your water!”  I could tell she felt ridiculous and finally went to get the Wild Boar.  How nice of her!

I begged for the anesthesiologist, I was lucky enough to get an epidural before it was too late. I wanted the actual birth to be a peaceful experience, without any crazy mouthing off from me.  In the end I couldn’t feel a thing and it was perfect. Epidurals are awesome that way.

But it all turned out great. After a couple pushes, the oldest hooligan was born.

Anyone who has given birth knows how amazing it is to feel the baby exit your body and be placed in your arms.  It’s when you start believing in miracles.

I remember immediately counting fingers and toes and inspecting him to see who he resembled.  I could have cared less how dirty and slimy he was and just so grateful he was healthy.

Then life as I never knew it began. 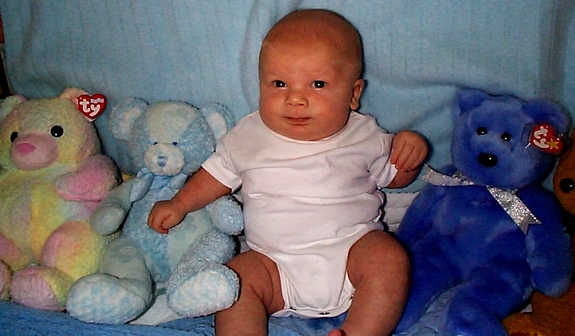 When we brought home this little guy, I really had no idea what to expect or how the exhaustion factor would begin to take a toll.

I remember coming home from the hospital, the baby strapped in his car seat and the Wild Boar placing the seat on the coffee table. He proceeded to put together strollers, cribs, playlands and bouncer thingys, all that crazy stuff you think you can’t live without.

I sat there and stared.  I distinctly remember thinking, “Now what?” 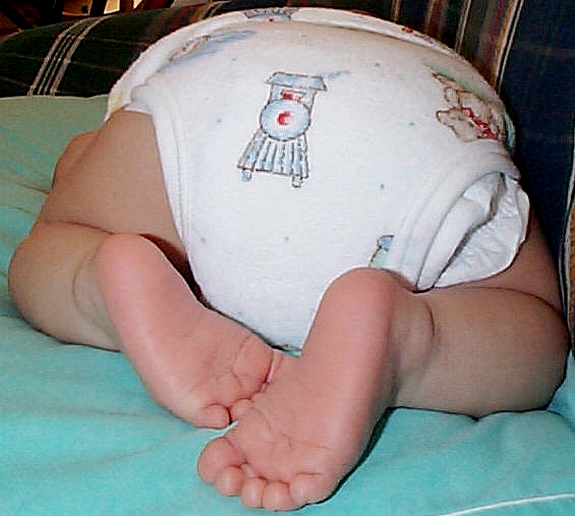 The magnitude of the sudden responsibility sat on my shoulders like a ton of bricks.  It hit me I could no longer leave the house without this little person coming along for the ride.

Of course it’s not like you don’t know this before they are born but when you get them home it’s just so real, the responsibility that is. 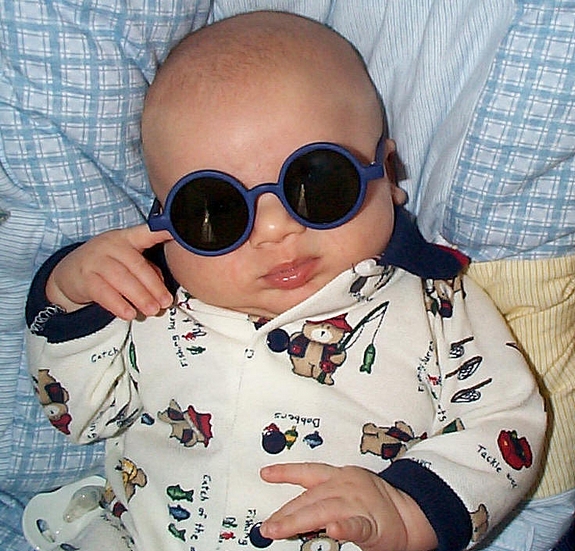 But after the fog lifts you realize how cool they really are. 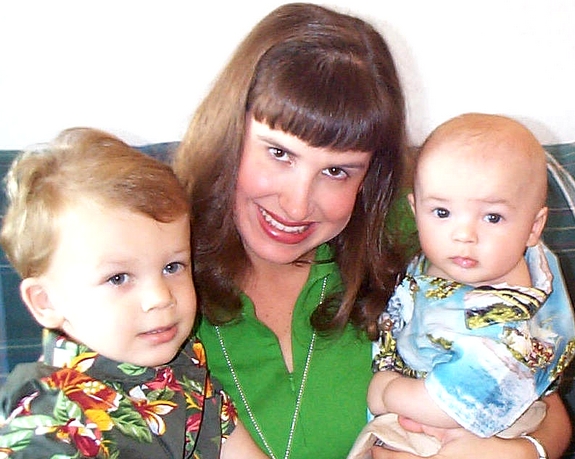 And before you know it another one comes along.  This picture was taken Mother’s Day of 2002.  The littlest hooligan is four months old and just finished his three months of bloody murder, screaming colic, which I never thought I would live through.

I actually look as if I finally had a good night’s sleep.  However, it’s Mother’s Day so maybe the Wild Boar let me sleep in that morning. 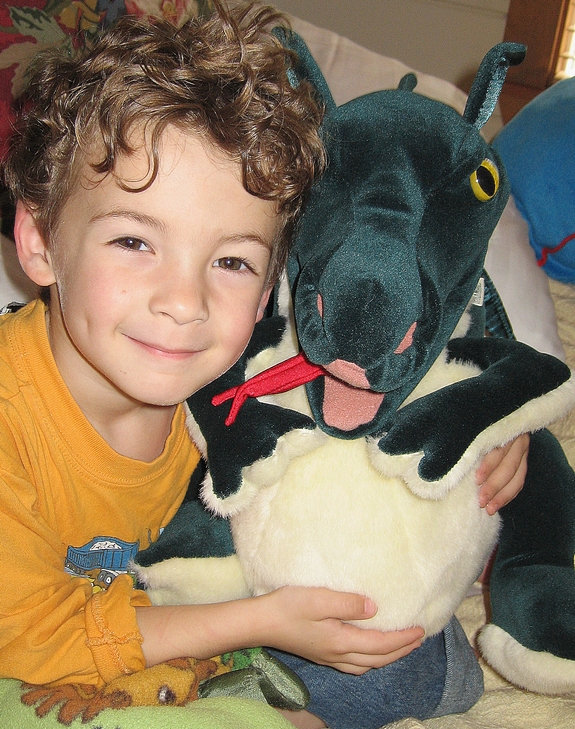 They grow up so fast and when you look back you wonder where the time has gone.  The saying, “the days are long and the years are short” never held so much meaning. 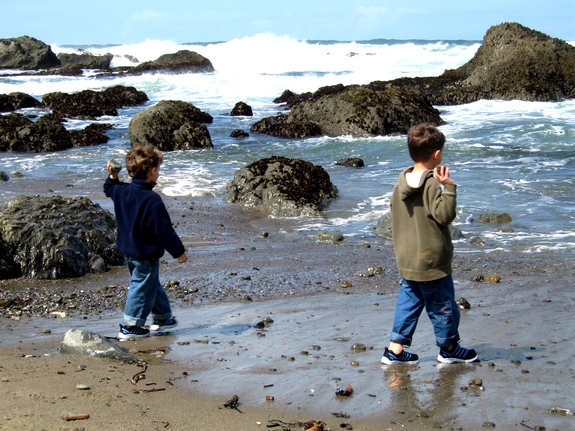 Before you realize it they are not only your sons but good brothers to each other. 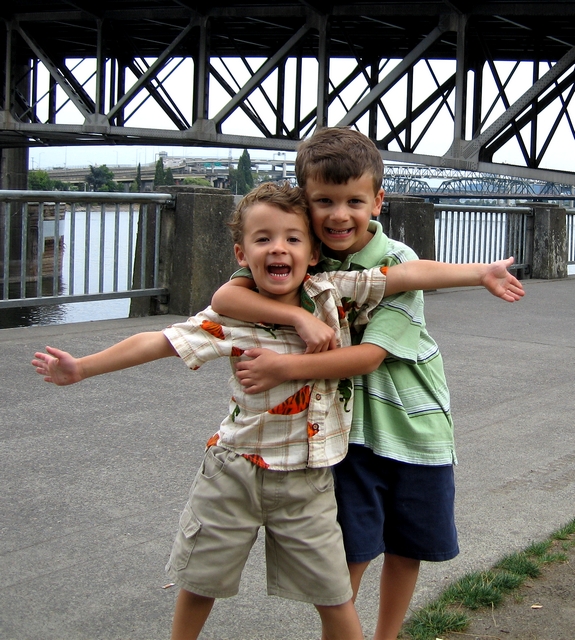 And whether we are hanging out in Portland… 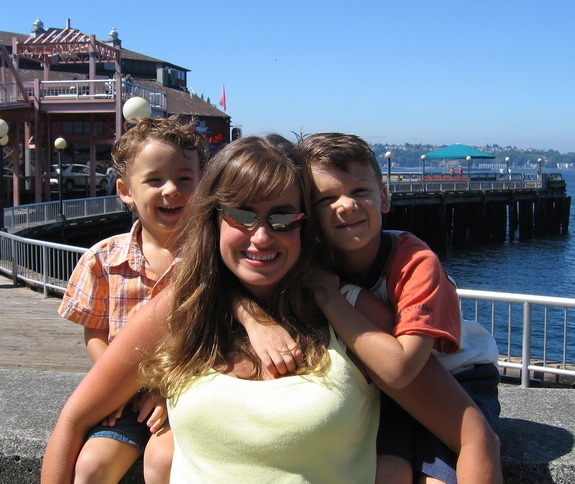 Or spending time in Puget Sound… 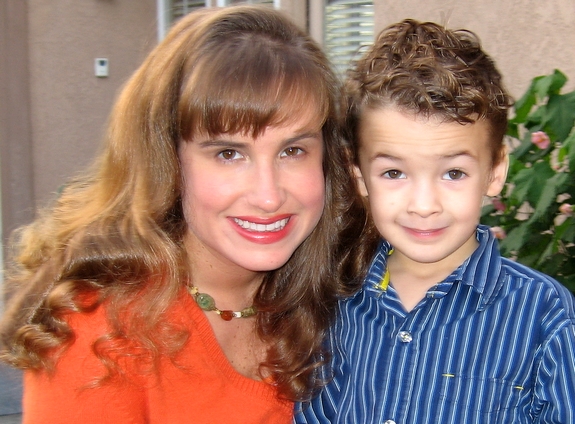 Or kicking back at home… 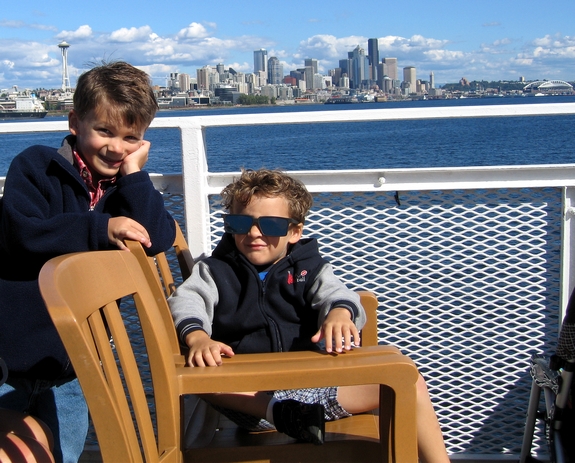 Spending time together always seems to be what’s best for everyone. 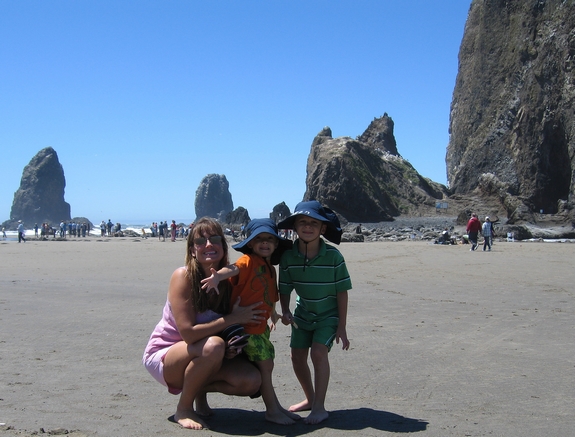 I can’t think of anything I’d rather be doing than being a Mom to these little hooligans. 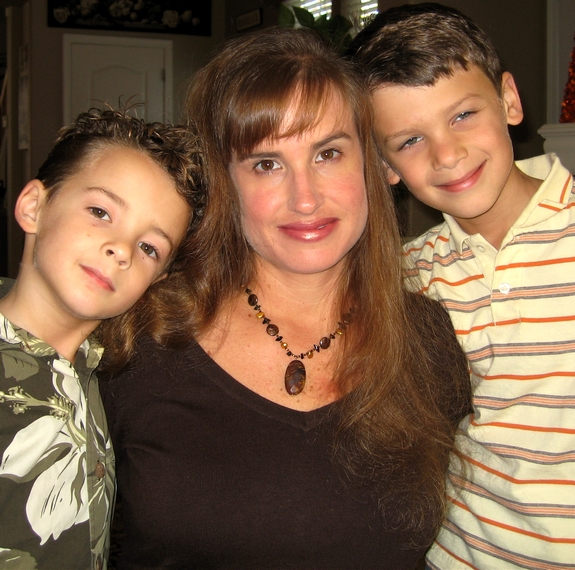 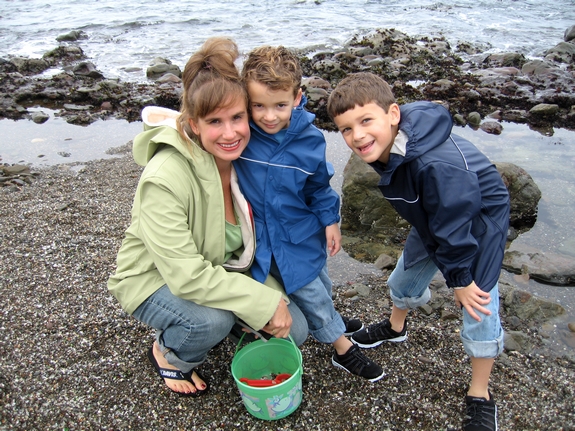 My heart on the outside.

Happy Mother’s Day to all the great Mom’s out there!

« Hpnotiq Breeze
A Night to Remember »