While I was pregnant with my first hooligan I bought him a very fluffy and soft blanket I fell in love with at the Baby Guess store.

Overall, the blanket was simple but there was something about it that just appealed to me.

When preparing the nursery, I placed the blanket on the bottom of the crib, over the sheet, to make the crib mattress more comfortable. 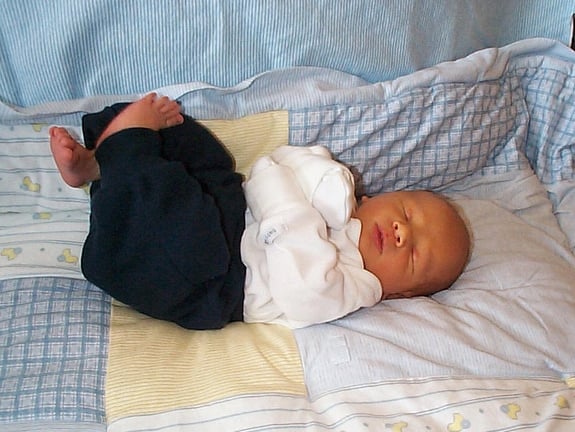 Here’s my hooligan laying on the blanket.  He’s only six days old.

This blanket became his most treasured possession.  This “blankie” has been to every market, store and restaurant I can recall.  It has traveled to Jamaica, Belize, the Caymen Islands, Mexico and Hawaii.  It’s been on planes, cruise ships, trains and Disneyland rides.

The problem is, the blanket is now 8 years old, and it’s a WRECK.

Here’s the hooligan eight years later with the blanket.  It’s literally ripped to shreds and has turned to a shade of off white.

Gone are the days of the soft, jersey-like material I used to wrap him up in, the pale blue patterns and sunny-yellow ducks have all but faded.

The blanket doesn’t leave the house with us anymore and is just something in his bed when he sleeps.  It’s appears as if it’s been on a combat mission that has served many tours.

However, here’s the problem.  My son is telling me to just throw the blanket away.  He says it’s ruined and he’ll just use another blanket now.

Whaaaaaaaa?  The blankie I gave you when you were a baby…throw it away…in the dirty trash can?  Is he kidding?

You have no idea how sad this makes me.  It stings to the bone.  I never thought I would be this sentimental of a Mommy.

Apparently, I am way too attached the blanket.

Does he not realize how I have lovingly cared for this blanket for so many years?  How many airports I have carried it through, never to be checked with luggage that had the potential of getting lost?

“Just throw it away Mom”, he says.

There are no words for how much it hurts me.