I’m not sure if I’ve ever mentioned it here but I belong to one of the greatest Supper Club’s.

Yes the food is always great but it’s really the people you enjoy being with that makes the night special.

This particular group has been going strong for 4 years now.  We have four couples and rotate from house to house every other month.

As the hostess you set the theme (but you don’t have to have one) and the job of appetizers, salad (or first course) and dessert is rotated among the rest of the group.  Each couple brings two bottles of wine while the hostess does cocktails.

Because you are only concentrating on your assigned task (apps, salad or dessert) the menu is always an exciting array of mouth-watering goodies.

We all anticipate the upcoming event with excitement mostly to see what everyone has come up with.  We also don’t usually discuss in great detail what each one is making; somehow it’s more exciting that way.

Like I said, we have done various themes over the years but it’s not required.

Some of the theme’s we’ve done have been Moroccan Night complete with belly dancer, a hookah and a Henna tattoo artist, a night at the French Laundry where all courses were prepared from the French Laundry cookbook, a Hanukkah dinner where we played Dreidel for Dollars, a Murder Mystery night where we all wore costumes and played our parts while dining on scrumptious food, a “Red” theme where the hostess transformed her whole house into a red light extravaganza complete with red candles and red paper lanterns.  We’ve done seafood themes by the pool, evenings in Spain feasting on Paella, favorite Fall foods (always a yummy night),  grilled to perfection steaks and let’s not forget The Newlywed Game with a full stage and all those lovely questions.

But this past Saturday night was hosted by Dan and Lisa who had the ingenious idea of a Rock-n-Roll theme.  Every couple had to bring their MP3 player loaded with their favorite songs that would be played during the food course they were responsible for.  Very cool, huh?

So the night started as usual, with the drinks.  Of course, right? 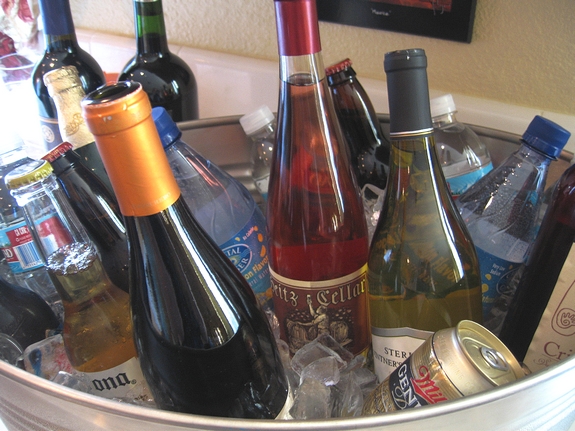 This is just some of the cold stuff. 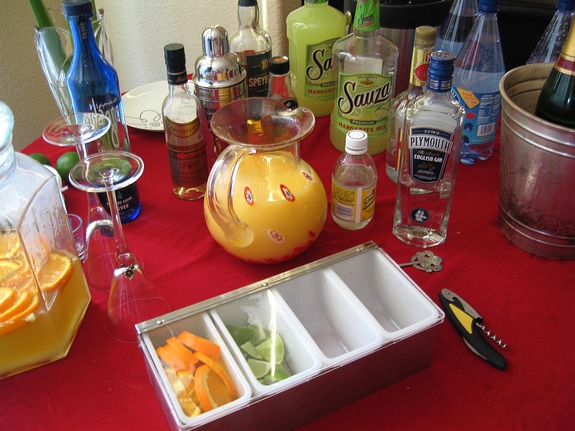 And of course there were more drinks over here.  Saturday happened to be 88 degrees.  We went from Winter to Summer in one day.  Where’s Spring?

Margarita’s were the perfect starting cocktail for this night because of the heat.  My friend Dan makes THE BEST DRINKS.  In the whole entire world.  And he knows how to make anything.  It’s ridiculous because before you know it you’ve had eighteen of these totally fabulous drinks and then, well, you know what happens.

Needless to say, everyone needs a friend like Dan.  Did I mention he also knows every bit of random trivia there is to know.  You never, ever want to go up against him in a trivia contest.  Yeah, been there done that. 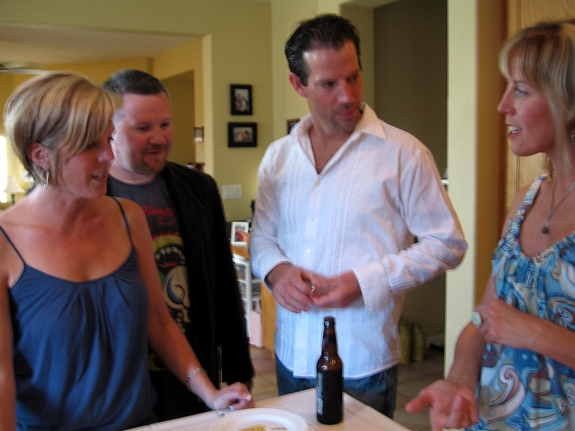 From left to right are Lisa and Dan (the hostess and host), Sean and Sandy.

I think they are getting ready to play spin the bottle, but I’m not sure.

Anyway Sean and Sandy were in charge of appetizers this go-round.  Because they are so clever not only did they bring their MP3 player full of tunes but they brought… 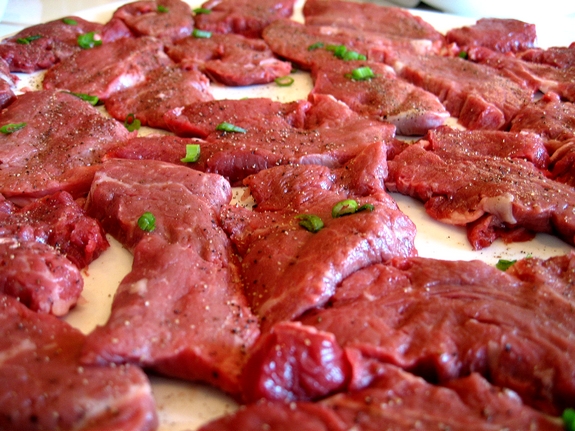 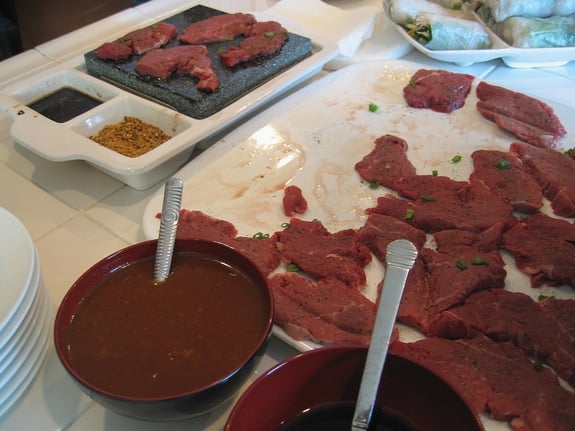 To cook on a rock.  See that stone over there…it was heated for two hours and then the meat is placed on top and cooked to your liking.  Ridiculously clever and shrewd don’t you think?  So Rock… 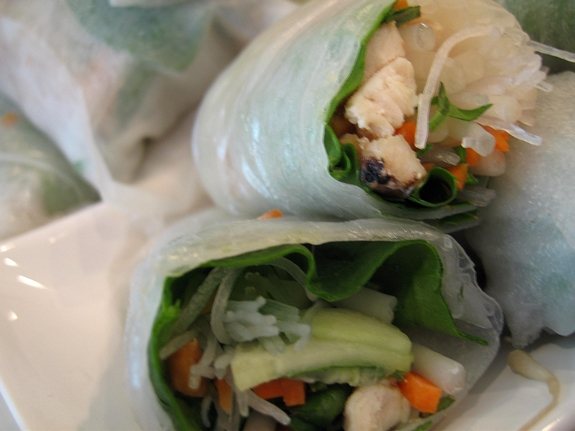 And Roll (Spring Rolls that is).  Gawd, I am always so jealous when people are that cool.  These Spring Rolls were killer.  They were served with a spicy peanut sauce I couldn’t seem to get enough of.  I smothered mine in them.  I’m crazy like that. 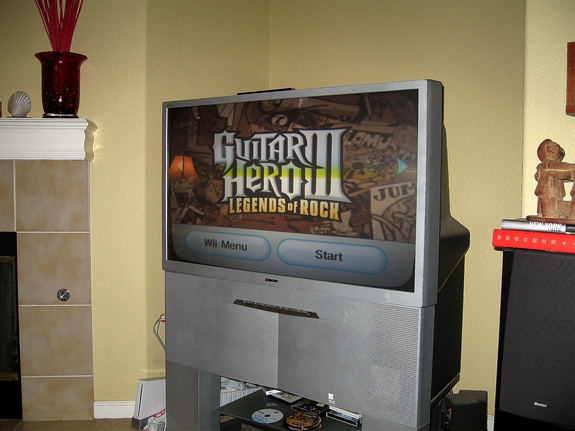 And of course what would a Rock-n-Roll supper club be without a little Guitar Hero on the Wii? 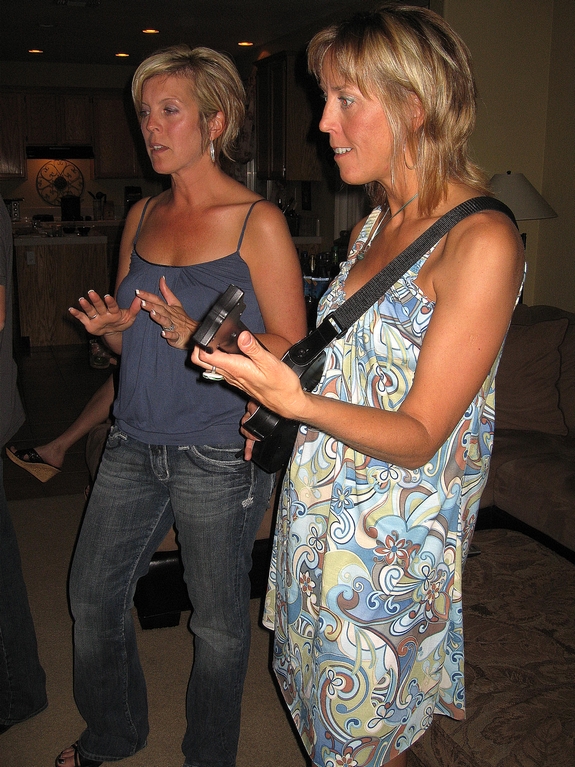 Of course we all had to give it a try.  Here’s Sandy under Lisa’s direction rocking it out.  This is a difficult game and requires skillful hand-eye coordination that I did not have.  I was booed off stage at least three times.  Whatever!  I have other talents. 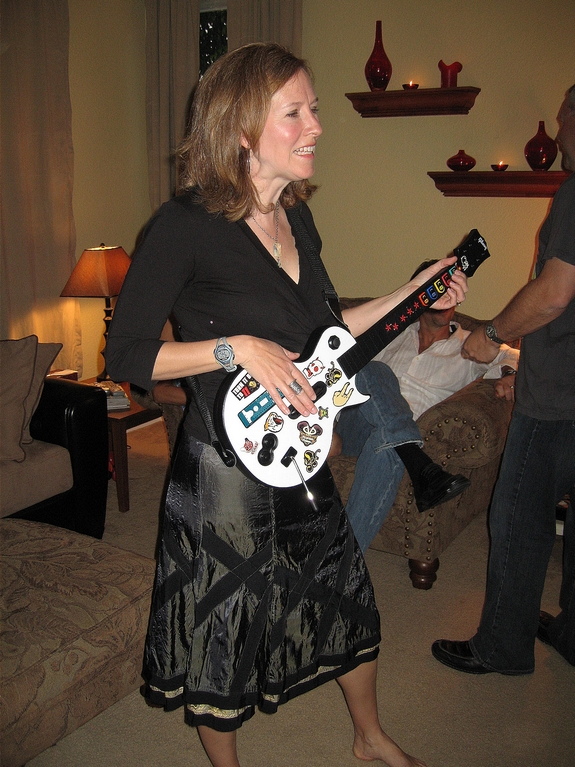 Here is my lovely friend Loran who was singing away as she tried her best to keep up with the game.  Again, very hard.  Isn’t her skirt adorable? 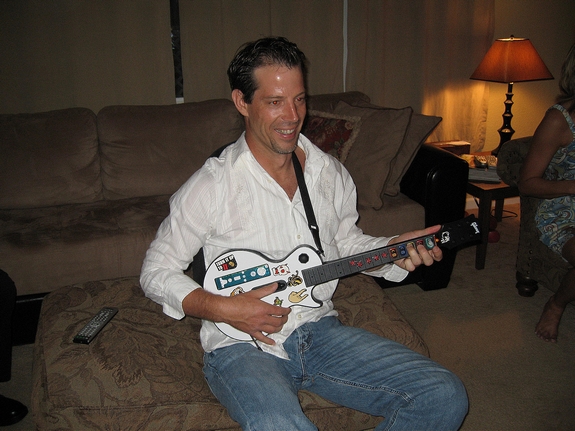 Here’s Sean showing off.  Whatever Sean, we know your good. 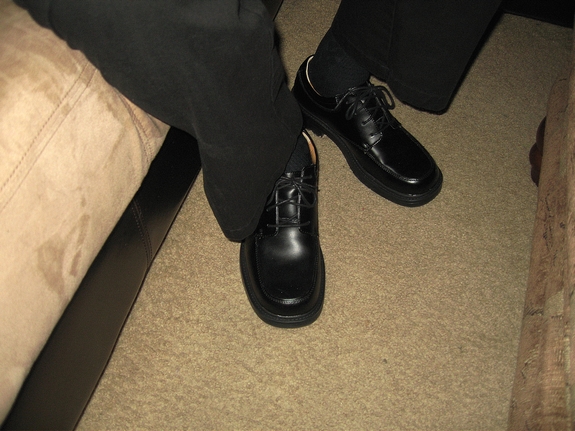 The Wild Boar enjoyed himself too.  Can’t you tell by the way his feet are pointed?

Let’s move on to the salad course shall we? 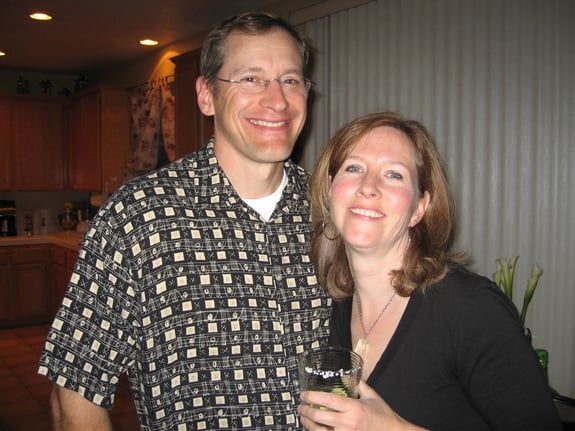 Mike and Loran were in charge of the salad preparation.  Of course there was no disappointment there.

Mike decided to go old school on us and prepare a very familiar, but special classic…..yeah! 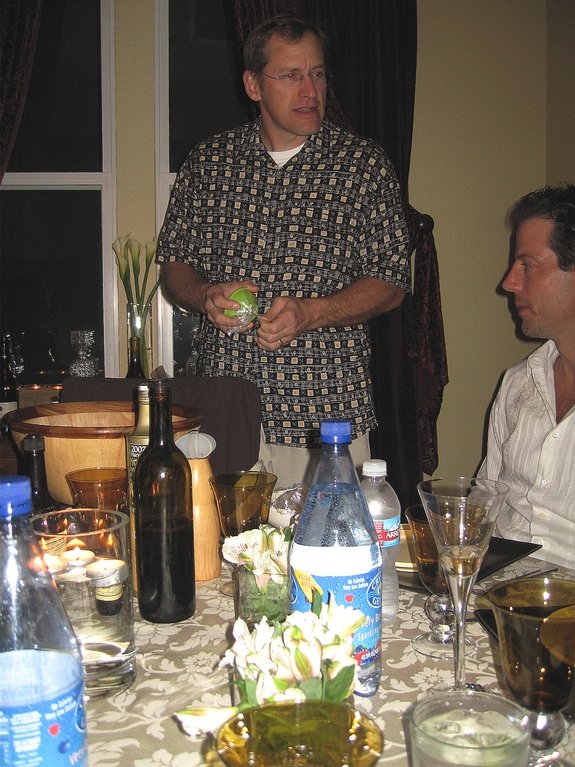 Yep, you guessed it, Caesar Salad prepared tableside.  Score!  He coddled his eggs and had this whole spiel on Caesar Salad history.  Who knew!  He was able to single-handedly crush eggs with a fork and a spoon and the yolk would just slide right out the side into the bowl.  It was quite the show.

Mike also paired the salad with the perfect Sauvignon Blanc from new Zealand.  It went well with all those extra anchovies you gave me.  Good work Mike.

These people are so good.  I’m glad I’m in their supper club. 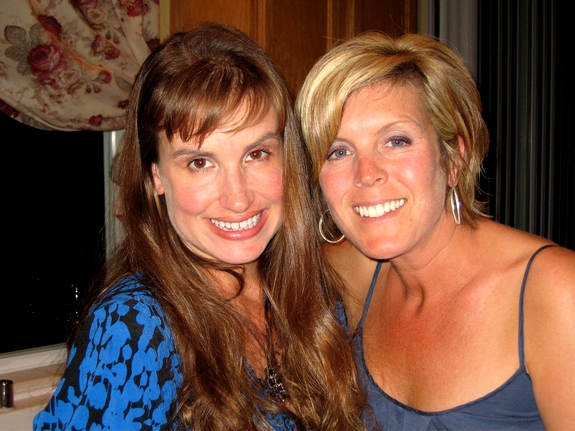 Then I went to go spy on Lisa in the kitchen.  I wanted to see what delicious main course she was making.

What I found what scrumptious. 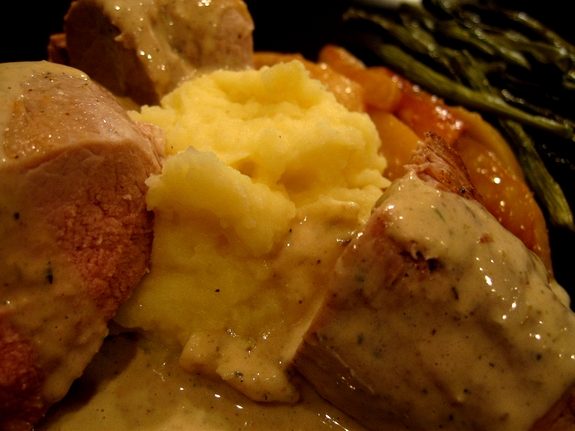 Pork Tenderloin with Caramelized Apples in a Pear Brandy Cream Sauce.  The sauce was poured not only over the meat but over some pretty awesome mashed potatoes with roasted green beans on the side.  Needless to say, it was a very rustic and comforting dish. It was the first thing I thought about when I woke up the next morning.  Just yummy.  I think if I bug her enough she will give me the recipe..right?

We truly stuffed our faces and licked the plates clean.  That sauce was killer. 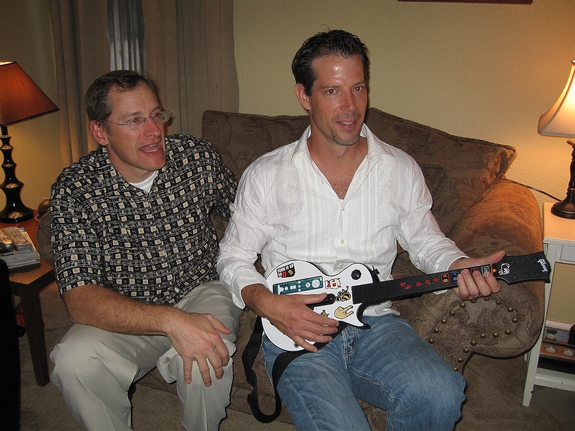 It was up to me to end this meal.  For a while now I have been wanting to do a dessert, wine and cheese tasting extravaganza.  So that’s what I did.  Of course I went overboard and the dessert course was enough to be a whole other meal for about twenty people but whatever. 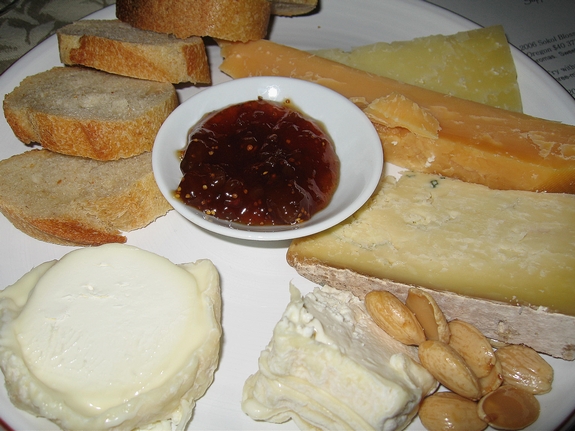 Now taking pictures of food is hard enough, but cheese…is even worse.  It’s just not easy to photograph.

Everyone was given a platter like this which included a round of Chabichou, a French goat cheese, and wedges of La Tur, a  three milk’s cheese (which is my ultimate favorite), Beemster Extra Aged (XO) Gouda from Holland, Colston Bassett Stilton from England and Vella Dry Jack from Sonoma.

Pimping out the platters were sourdough batard, Marcona almonds and fig spread.

This would have been enough right?  I should have stopped here, but oh no, I didn’t.  I kept going. 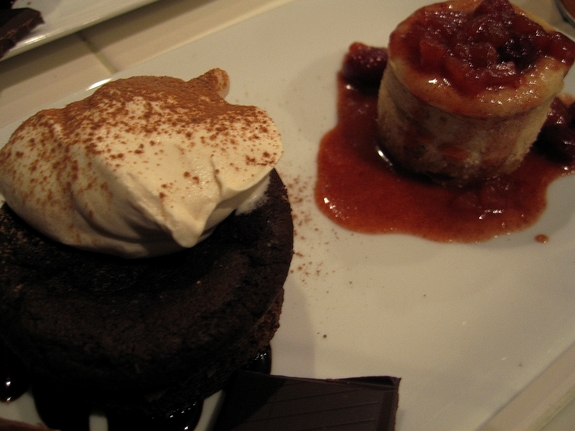 Everyone was also served a second platter with an Individual Guinness Stout Chocolate Cake topped with Brown Sugar Whipped Cream as well as a Mini Pear & Ginger Cheesecake with a Walnut Shortbread Crust.  The cheesecake was doused in a compote of cranberry and pear made from a Late Harvest Gewurztraminer and reduced until syrupy.  On the side, a wedge of Valrhona Le Noir Amer Chocolate (71{5396afcf7ebcb011d88226d96591fa60d0bb5a6cac0179c8121d60c005c366a8} Cacao) and a wedge of Cafe Tasse Lait Artisanal Chocolate.

All cheeses and desserts were paired with dessert wines.  I might as well name them for you, I mean why stop here.

On the dessert wine menu was a 2006 Sokol Blosser Late Harvest Riesling, Dundee Hills Oregon.  Next a 2005 Château de Cosse Sauternes, France and we ended with a 2001 Dow’s Late Bottled Vintage Porto, Portugal.

Believe me it was insane.  Like I said, what was I thinking with all of that!  Sorry guys, you know I go a little crazy sometimes but I tend to get really excited about things.

All in all it was a great, great night.  Thank you to Lisa and Dan for opening your home to us once again and thanks to Sean, Sandy, Loran and Mike for all of your wonderful food but mostly your friendship.  And thank you to my Wild Boar who let’s me do whatever I want as crazy as it might be.

Anyone else out there in a supper club?  How does yours work?